While The Iron is Hot 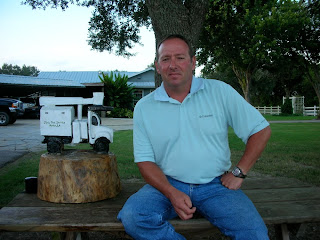 Trees are as much of a part of Vermilion Parish’s landscape as canals, pastures and crawfish ponds. Live Oaks shade us, Crepe Myrtles provide colorful scenery, and Cypress and Pine build furniture and homes.

But like any living being, trees need to be cared for and maintained. This week, I visited Jimmie Meaux Jr. of Jim’s Tree Service to find out what it’s like to be an arborist.

“When I look at a tree, I can tell if it’s diseased or has any root and insect issues,” says Meaux. “I love climbing old majestic Live Oaks and having an input on their health and shape.”

“I saw the potential in this market one day when I cut down trees for my father-in-law,” says Meaux. “I started out slow and grew over the years.”

Meaux is a member of the International Society of Arborists and has a Bachelors of Science in Agronomy. He attends several informational seminars and conferences a year ranging from botany to safety issues to the latest technology in climbing and tree cutting.

“To be successful, it’s important that I know as much as possible about the industry,” says Meaux. “Safety is my main priority. In fact, I tell anyone working with me that I’ll give them ten dollars if they ever catch me cutting without a helmet. I’ve never had to pay it yet.”

According to Meaux, the biggest mistake that homeowners make when cutting their own trees is using a ladder. This is a safety hazard because a branch can easily swing down and knock the ladder out from beneath them.

I had never met Meaux before I visited him at one of his jobs. My first glimpse of the arborist was of him in a white bucket connected to a long pole that sprang out from the back of a truck about the size of a fire engine. He was cutting the branch off of a Live Oak with a chainsaw with the precision of a surgeon or sculpturer.

Meaux was wearing a hard hat as well as many harnesses and straps that crisscrossed around his legs and torso. When he saw me, he drove the bucket down from the air onto the back of the truck.

“It’s your turn to get in here,” Meaux said and smiled. “I’ll control it from the ground. All you have to do is enjoy the ride.”

I had never been up in a bucket truck and never really had the desire. But before I could object, Meaux had me strapped in and was sending me up in the air above telephone poles and pine trees. My heart sank and my knees buckled beneath me as I got higher and higher and could eventually see all of Abbeville, including several graveyards. 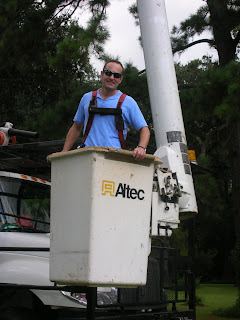 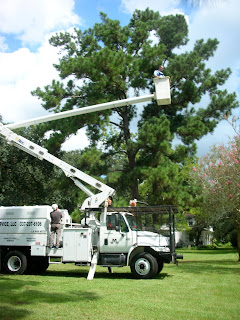 When Meaux decided that I’d had enough, he brought me back down. My legs were still shaking as I stepped onto the safe ground and grabbed my tablet to start the interview. But the arborist shook his head.

He grabbed some rope and other harnesses, and led me over to a Live Oak. Then he illustrated the latest technology in climbing equipment and how to use it effectively and efficiently. 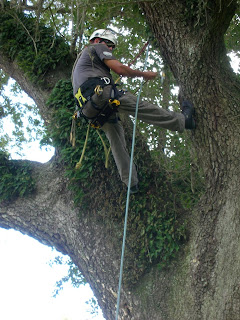 “It’s important to find the right branch when you throw a rope up into a tree,” said Meaux. “You want to make sure that it’s sturdy, at a good angle and not rotten. This will make it easier and safer to climb, and will also avoid harming the tree.”

Minutes later, I was in a harness and walking up the trunk of the Live Oak. Meaux comforted me by saying that I was the right body type for climbing. But he didn’t mentioned how my body would respond if I fell and slammed against the ground. 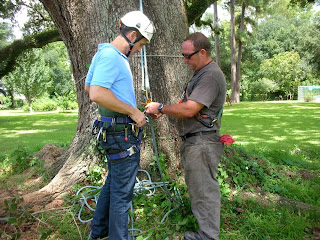 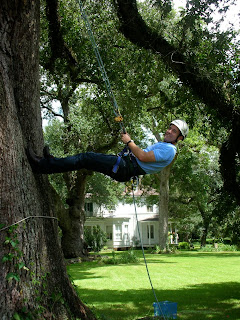 Except for a few heart palpitations, and blistered hands, I made it out of the tree without a scratch. I contribute my well being to Meaux’s expert knowledge of climbing and safety, and his instinct not to trust me with a chainsaw.

During my visit, the owner of the Live Oak walked up to Meaux and me. He said that he couldn’t believe how fast the job had been completed because he’d only called Jim’s Tree Service the night before.

“My grandpa was a cattleman, and he had a saying that I like to live by,” said Meaux. “You got to brand that cow when the iron is hot.”

I had the good fortune of meeting Meaux’s wife, Andrea. She is a member of the Jim’s Tree Service team, and also has her own business selling firewood.

I spent several hours with the couple later that evening at their home and business in Kaplan. Mr. Meaux showed me several pictures of some of the five thousand plus jobs he has completed, and shared his philosophy on work ethic and perseverance.

The interview was very insightful not only on the in and outs of being an arborist, but also on the goals and challenges of careers and daily life. Meaux sent me high up in the air to face my fears and give me a glimpse of the surrounding environment. Then he brought me back down to use my newfound knowledge, and to brand that cow while the iron was still hot.