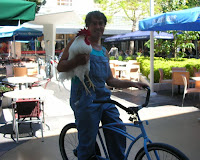 I know you're busy so I'll keep this short. I took pictures and I wrote down my first thoughts of them. I took the one with the rooster and the Starbuck's sign in Miami last week. The rooster's crow was what brought my attention to him. My first thought was, "Am I drunk?"

But then I saw a guy pick the rooster up and put in the front basket of a bicycle so then I thought, "Yeah, I'm drunk."

But then I stopped the guy in overalls, (see second picture) and found out that he was the rooster's agent, whose name was Mr. Clucky. Then he gave me a business card with Mr. Clucky's website, (Mrclucky.com) and told me that he also had a MySpace Page. At first it didn't surprise me when he told me. But then I was a little surprised that I wasn't surprised. You have to admit. A rooster with a Myspace page and an agent is pretty surprising. But I guess after living in New York, nothing is surprising anymore. Surprising. I just wanted to say the word, "surprising" again. Anyway, I guess I just thought it was weird because it's like I'm starting to see the difference between living in New York where nothing is surprising and living back in Cow Island with my momma who thinks it's surprising that Carla Montgomery (An African American newscaster) has straight hair.

She told me one day, "I have so much respect for that woman. She has white people's hair. How do you think she gets it so straight?"

I looked at her because that surprised me.

Then she asked me again, "How do you think she does it?"

I told her, "I think they sell chemicals that will straighten people's hair (I've used them myself and some are pretty impressive.)"

Then she raised her hand and said, "Well, it's none of my business."

She said the same exact thing the next night. I'm going to have to go and buy her a box of Dark and Lovely and do a demonstration on the few hairs I have left. 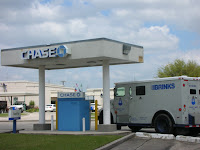 Now the other picture is of a Brinks truck that was in front of me at the ATM today. My first thought was, "That's weird. In the movies, they always back up to the bank and load the money in big bags. That's pretty inconvenient if they have to take it out through an ATM at a $300 limit each time. They'll never be able to fill up that truck. Oh, and I'm in a hurry. This shrimp poboy I just bought is starting to stink up my blazer (Chevy, not navy) and I want to make sure that I eat it while it's still hot because there's nothing better than a hot poboy."

So I got out of my blazer (Again, Chevy, not navy) and walked up to the truck and some guy jumped out with a bag and a key. He unlocked something on the ATM with the key and looked at me.

I asked him if he was going to be long and he said, "Probably. But there's another one in the bank."

I felt like asking him if I could just show him my ATM card and he could write my name down and give me $300. But he didn't look like he rolled that way.

Anyway, that's it. I would love to hear what your first thoughts of the pictures.

I recently spoke at the Carrollton School of Sacred Heart in Miami, Florida. The girls welcomed me with warmth and made me feel like a movie star. The event was arranged by one of their teachers, and my good friend, Crissy Fano. I want to thank Crissy for everything she did for me this past week. Not only did she chauffer me around the city, but she also fed me, gave me a place to sleep and provided an opportunity to spend time with our best friend Heather and her two great children. So thank you, Crissy. You helped create a memory that I will never forget. You are an amazing person and your kindness and generosity contribute to making the world a better place.
Posted by Jacques at 7:16 PM No comments: 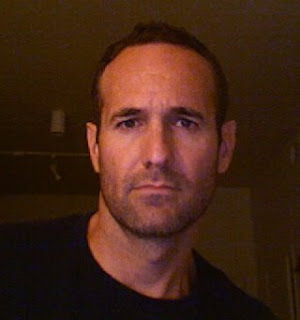 I called my mom yesterday to ask her to look through my mail and tell me if there were any checks. There weren’t any, but I did find out that I had the chance to win 10 million dollars, and all I had to do was fill out 72 forms over the next 2 years and somehow try to maneuver around getting roped into a magazine subscription for something called, “Pictures of Cats who Knit”. No thank you, Publisher’s Clearing House. I’m still paying for my subscription to, “How to Look Good in Shorts at any Age.” My 79 year-old mother read it the other day and is trying out some of the looks. Since I’ve moved back in with her, I’ve had to cut her toenails, pluck the hairs out of her chin, and sit in on her gynecology examination. I do not need to see her in a pair of cut off jean shorts and red cowboy boots.

Anyway, there was also a UL Alumni magazine that had an article about me in it.

My mom told me, “You want me to read it to you? There’s a horrible picture of you. You look so serious and old.”

I’m not exactly sure what picture she’s talking about, but I think it's the one above. I know I my expression is of a person trying to decide between paper and plastic at the grocery store check out line, but I ask you, what’s so bad about that? Are we supposed to take every picture like we did as kids? Like there’s some moron holding up a sock puppet and singing some song about Old McDonald and his goat?

And maybe I was thinking about something really insightful? Maybe I was solving some of the world’s biggest problems, like media coverage of Brittany Spears and Paris Hilton. And so what if I looked old. You know what mom, I am old. I’m 38 years old. At that age, you’d had seven children and an obvious lack of self-control. So it’s okay if my pictures don’t involve me sitting on Santa’s lap or laying naked on a fluffy pillow. And to tell you the truth, I’m not crazy about my smile. I have a big wide nose that I inherited from your mother, who I loved dearly. And I’m proud of that big wide nose. I just don’t want it photographed.

I love you mom, but when you look at that picture, you need to stop seeing your baby. You need to look deeper and see someone who considers himself the luckiest person in the world to have you as a mother. And this makes him so happy, that he becomes a little sad, because he doesn’t know how to express it.

By the way mom, some woman emailed me about that picture and said she found me very attractive. Granted, she was 75 years old, but she had all of teeth. I guess that’s it. Happy Easter Everybody.

Jacques
Posted by Jacques at 8:13 AM 6 comments:

Planting Trees Behind my Mama's House

I've been crazy busy so I'm going to video blog a little here and there. Hope you enjoy.