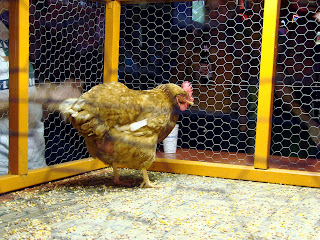 When I was in college, one of my fraternity brothers suggested having a chicken bathroom (the number two) bingo as a fundraiser. He explained that the way the game worked was that you put a caged chicken on top of a piece of plywood painted with numbers like a bingo card. People would buy tickets with numbers on them and hope that the chicken would use the bathroom on that number. None of us had ever seen chicken bathroom bingo before (say that fast five times) and thought it to be a little odd and perhaps dangerous.

We never had the fundraiser but almost fifteen years later, I decided to “use it” in my novel, The Chicken Dance. The local grocery store in the novel used chicken bathroom bingo to pick a number every Saturday morning, and the first customer who bought the exact dollar amount of groceries that morning, won a prize. One morning, Don’s mother was the winner and Don received a KC and The Sunshine Band album. It became a large part of his life and helped him to get through tough times.

When I was living in Austin this summer, I ran across an advertisement for a bar called Ginny’s that played chicken bathroom (not really the word they used but this is a family show) bingo every Sunday night. I had never been to one and decided that I needed to check it out since I had written about it and people might ask questions.

I convinced a friend to come with me, and so we headed to the bar with different hopes and expectations. I fantasized about the chicken looking me in the eyes and then walking over to my number and dropping off a load. Then I imagined balloons falling from the sky and photographers coming from out of nowhere to snap a picture of me, and my winning ticket. I thought the Austin Chronicle would feature a story about me and that I’d have the publicity of my dreams for my novel. My friend hoped that there would be mashed potatoes and a biscuit with his chicken.

“When we eat the chicken,” he said. “I hope it comes with side orders.”

I asked him what he was talking about and he said that he thought we were going to play bingo and eat chicken.

“I told you we were going to play chicken bathroom bingo,” I said. “Where did you think the bathroom part came in?”

“I hadn’t figured that out yet,” he said.

I laughed until my side hurt while he stared ahead, upset that he wouldn’t be eating the Kernel’s secret recipe, while an MC yelled out a numbered printed on a little ball.

When we pulled into the parking lot of Ginny’s, we were greeted by a motorcycle gang, contestants from a beauty contest, a wedding party and about 15 dogs.

“Look,” my friend said. “I’ll go in but you have to promise me that we won’t stay long and that we’ll go out for chicken after.”

We shook on it and then made our way into the tiny bar. Inside was a band that played everything from Hank Williams Jr. to Lynard Skynard. The lead singer was a large man who wore a shirt that said, “I’m on a seafood diet. I see food and eat it.”

The rest of the crowd consisted of sorority girls, men with full-grown ZZ Top beards and gold teeth, and a 70 year old woman in a flowered mini-skirt and cowboy boots, who immediately grabbed my hand and told me that I had to dance with her.

After she spun me around for a few songs, she released me and I went stand in line to buy tickets for the bingo. Ginny herself sold me a ticket and kissed me on the cheek and wished me good luck.

She gave me the smile most people give me when they have no idea what I’m saying and suspect that I might be a few fries short of a Happy Meal. And so I walked over to my friend and showed him our tickets.

My friend didn’t understand my Cajun expression and gave me the same smile that Ginny had given me. Then he who told me that he’d spoken to the bride and groom of the wedding party.

“It was a wild west themed wedding,” he said. “And right when the groom was about to say I do, an actor playing Jesse James came up and grabbed the bride. And then they had a pretend gun fight for her.”

“Are you sure it was a wedding,” I asked. “And that he wasn’t just describing a scene from Dr. Quinn Medicine Woman?”

My friend introduced me to the mother of the groom and she assured me that a wedding had taken place and that the entire party had been drinking for three days straight. Then a man standing two feet away vomited on my shoes.

“Fantastic,” I said. “If you’ll excuse me, I have to go and watch that chicken and make sure it goes number two on 52.”

If you’ve ever watched a chicken and waited for it to use the bathroom, you’ll know that it happens in a matter of seconds. Chickens don’t squat like dogs, so there is no forewarning that something great is about to happen. It just walks around and so you have to watch to see if it leaves anything behind. When it did, the entire crowd cheered and seconds later the room was filled with little red tickets of disappointment, excitement and laughter, flying through the air.

Neither my friend nor I had the winning ticket, but since I’d only spent two dollars, and planned to write it off on my taxes as research, I wasn’t too depressed. I was actually kind of happy because the lead singer of the band (the one on the see food diet) won for the first time in the twenty years that he’d been performing at Ginny’s and I had been there to witness it.

Later that night as I drove my friend to a chicken restaurant so he could get his mashed potatoes and biscuit, I thought about my evening. Although I hadn’t written about a bar in the fictional town of Horse Island, I could picture Ginny’s standing on Main street, sandwiched between Horse Island Food and Furniture and Connie’s Cones and Condiment Stand. Some people have called The Chicken Dance whimsical and borderline unbelievable. Well, these people have obviously never been to Ginny’s for Chicken Bathroom Bingo.
Posted by Jacques at 6:05 AM 12 comments:

Since you are the only one who reads this blog faithfully, or only say that you read it faithfully, this week’s blog is going to be a letter to you. I can’t believe we're 38 and you have three kids. Dude, we’re like grown up now. Do you remember how cool we thought we were in college? It’s a wonder that we didn’t get beat up. Anyway, yesterday I had a book signing at Lily’s. It was kind of weird to have these people spend $16.95 ($18.31 after taxes) to read something that I wrote. I hope they don’t read it and don’t like. Do you think people can return books? I hope not. I’ve already spent my advance. So, do you ever think about political office? You told me in college that one day you were going to be governor of Louisiana. Is that still the plan? So, you don’t think you look the same as you did back in college? I totally still look like I’m 21. Well, except the hair is growing on my back instead of my head. Oh yeah, two people that I hadn’t seen since college showed up. One was Michelle Vidrine who I was really good friends with my freshman year and the other one was Muffy, a girl I met in my first English class. She’s the one that convinced me it was cool to wear biker shorts to class. I’m sorry but in 100% weather, biker shorts are not cool. I went to her wedding in college and I never got her a wedding gift. I feel so bad. I’d give her a book but she already bought one. Oh well. So tonight I had another book signing. It was at this cool store in Abbeville called The Depot. It was kind of a book signing/party because there were drinks and meat pies. They were really good and this guy named Chef Bobby donated them. His food is amazing. So that’s a party, right? It was kind of cool. I saw a lot of people that I hadn’t seen in a long time. I forgot how friendly people here are. Everyone in the Parish has been very supportive. So I guess what I’m saying, Tony, is you need to buy the book. And you need to buy your parents a book because they were like parents to me and I’d like them to have one. But not a free one. One that cost $18.31 plus tax. I know they’d want you to pay full price for it. Hey, remember when we made that deal that when we got old, the richer of the two would pay off the other one’s credit card debt? Well, guess what. I’m thinking of going to Aruba next month and I don’t have a job. So, I guess that means you win. I’m just kidding. I wouldn’t make you pay up on that debt. We were so stupid in college. But now we’re grown men with ear hair and arthritis. You have a great career, a beautiful wife and three kids. And I’m living in my momma’s house in the same bed in the same room I grew up in minus the Lionel Richie poster. But, I wouldn’t trade it for the world right now. We need to meet up soon. Let me figure out my schedule and I'll email you. Or write it on this blog. So, if you really read this like you say you do, you’ll send me an email and tell me that you read it.