The Man in the Red and White Suit 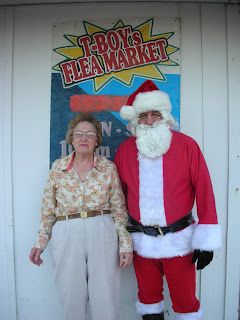 For the first few weeks of December, I was in one of those moods that kept me from getting into the spirit of the season. I knew that I needed a jump-start to help me feel jolly, and so I decided that I would apply for a job that had a holiday theme.

I thought about my options, and came up with toy maker, Christmas tree grower and reindeer handler, none of which I thought I was qualified for. But several days ago, while reading The Abbeville Meridional, I found the perfect job to help get me in the holiday spirit. I would apply to work directly for Santa Claus.

After reading about his appearance at the recently passed Cattle Festival, I made a few phone calls and found out that he was going to be in Abbeville the week before Christmas. I managed to get in touch with him directly, and set up an interview at a place called T-Boy’s Flea Market.

I brought my mother with me, and as I drove down Charity Street towards the courthouse, she helped me look for a big blue metallic building. I found it easily because Mr. Claus was sitting in front of it in his red and white suit.

“Why are we here?” my mother asked as we pulled into the parking lot.

“I’m interviewing for a job with Santa Claus,” I said.

She told me that I was too skinny to fit in the suit, and I explained to her that I was applying for a job to work for Santa Claus, not to actually be Santa Claus.

“I’m not even sure who you would have to talk to about becoming the big man,” I said. “But who cares. Maybe he’ll give you something like a bag of aluminum cans.”

We got out of the car and walked towards the front door of the building. Before we arrived, a woman walked out of the store and stood next to the man in the red and white suit.

“This is my daughter, Kimberly,” Santa Claus said.

I hadn’t realized that Santa Claus had a daughter, and I wondered if he’d accidentally told me some big family secret. I thought about threatening to call the National Enquirer with this information unless he gave me a brightly wrapped present from his big black bag of toys.

As I fantasized about what I’d get, my mother asked Santa Claus who his daddy was. Within twenty seconds she knew more about his family than everything I’d learned as a child from watching all of his Christmas specials.

I didn’t feel like explaining to her again that I wasn’t applying for a job to be the man who slid down people’s chimneys and put gifts into stockings and under trees. So I suggested that she check out what was inside the flea market, and to look for something for me. Mr. Claus’s daughter said she’d be happy to show my mother around, and then the two of them went into the store.

I sat outside in front of the flea market with the man in the red and white suit and wondered how I should address him. I didn’t know if I should call him Santa Claus or go with something more formal like Mr. Claus or Monsieur Kringle. I decided to try and avoid calling him by name, and then looked down at my list of questions.

There was note for me to ask him what types of jobs were available with Santa Claus. I didn’t think I’d like making toys, and probably wouldn’t want to live in the North Pole. I wondered if I could become his sleigh-driver, and if I should tell him about my experience of driving my mother around.

I imagined her sitting in the back seat of the sleigh and yelling at me about speeding as we flew across the sky. I wondered how I would explain to her that sometimes Rudolph got a little freaked out and went faster than he should. Just the image of the situation made me not want to be a sleigh-driver anymore, and so I thought I would ask Santa what it was like to take care of reindeer.

“Have Dasher, Comet or Cupid ever bitten you?” I asked him.

He laughed, and I felt happy to know that Kris Kringle had a sense of humor. This was a requirement I looked for in all of my employers, and I became more enthusiastic about driving his sleigh. I decided that if the position included insurance, and I received a brightly colored package from the big black bag of toys, I would take the job.

A few seconds later, someone walked up and called Mr. Claus by the name, T-Boy. I asked him why, and he said that it was his nickname, and when he was in Vermilion Parish, he liked to be addressed by it. I felt relieved that I hadn’t embarrassed myself by calling him, Monsieur Kringle.

I knew that a man like this had probably seen a lot in his life, and so I asked him to tell me about his favorite Christmas memory. He told me that one time he helped Saint Theresa’s church hand out bicycles to 125 orphans throughout the parish.

“I love working with kids,” he said. “I can’t tell you how good it made me feel to see the smiles on their faces. That is why I do this.”

The story was just what I needed to jump-start my holiday spirit, and I didn’t care anymore if Santa Claus or T-Boy gave me a brightly colored package. The expression on his face told me that this was a man who truly believed in giving, and his words were the only Christmas present I needed.

I realized that since I had become filled with holiday spirit, I didn’t need to get a job working for Santa Claus anymore. I was going to end the interview, but then became confused about why the man in the red and white suit was just hanging out in Abbeville the week before Christmas.

“Shouldn’t you be building toys or something?” I asked.

He shook his head and said, “No. I get a lot of my stuff here at the Flea Market.”

He showed me inside the store, which was a large room filled with amazing collectibles ranging from coffee pots our grandma’s used before cappuccino makers were introduced, and glass bowls and vases of every size, shape and color.

My eyes lit up like a kid in a candy store, and I explored this treasure chest of days passed. As I meandered around a corner, I saw that there was something under the tree for me. It was a used black leather desk chair similar to ones I’d seen new for a couple of hundred dollars.

The holidays are here, and for some of us the brightly colored lights, neatly wrapped presents, and shimmering ice cycles surround and comfort us like our favorite warm sweater or blanket. But for others, this time of year is one of sadness, stress and loneliness. I have experienced the latter of the two feelings several times, but a few years ago I realized why.

At the time, I was living in New York and working as a tie salesman at Ralph Lauren. It was my first Holiday season at that store, but I knew from previous retail experience that since I was paid on commission, it could be very profitable. This was important to me because I was in a difficult financial situation. I could barely afford rent and other bills, and would not be able to exchange gifts with friends, or fly home to see my family.

On Christmas Eve, a customer came into the store looking for a last minute gift for her daughter’s new husband. I showed her our most popular items like golf shirts, cuff links and ties, but the customer vetoed all of them because she said she didn’t know her son-in-law’s taste. She finally decided on a pair of $150 red cashmere socks.

“I don’t know if he’ll like them,” she said. “But he better appreciate them because of how much they cost.”

I should have been happy because of the commission, but I was suddenly filled with sadness and a little anger. When the woman left, I excused myself from the sales floor and went to the employee kitchen to think about what I was feeling.
At first I felt hate towards the customer because she had the money to spend $150 on socks, and I had been surviving on cans of soup so I could pay rent. I became more angry as I thought about how I would be spending Christmas day alone, and her son-in-law would have his feet wrapped in cashmere.

But then I realized that what I was truly feeling was jealously, and that the emotion would neither solve or change anything. It would only fill me with more hate and anger and grow like a cancerous tumor.

It was at this moment that I decided to re-evaluate the meaning of the holidays. I knew that to some the time of year was about profit, but to others it was about the celebration of life, and the overcoming of obstacles.

To me, it was a time to get together with family and friends and be thankful for all that I had going for me. I had my health, and people who loved and supported me.

I realized that in a strange way, my interaction with the customer had been a blessing. She hadn’t change what the holidays meant to me, but she had made me think about how I would celebrate them.

I decided that I would no longer let the fact that I couldn’t afford expensive gifts, keep me from enjoying the holidays. I would instead give my loved ones something that I felt was more valuable; time. Socks wear out, but memories of a nice dinner or a walk in the park will stay with people forever.

Later that evening, I called a friend who I knew would also be alone in New York for Christmas. I asked him if he wanted to come to my apartment for lunch.

“I don’t have a Christmas tree, or a gift for you,” I said. “But I can open up the best can of soup I have and maybe even spring for some eggnog.”

There was no cashmere, or mounds of wrapping paper and presents to celebrate the holidays. But I consider the lesson I learned, one of the most valuable gifts I’ve ever received.
Posted by Jacques at 4:04 PM 2 comments: