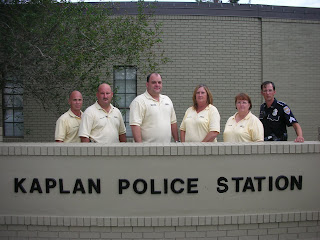 You can’t turn on the television these days without seeing some sort of police series. There are about four different versions of CSI and five Law and Orders. The actors and actresses usually look like models from a cologne ad, and are always in the latest fashions and high heels (the women, not the men.)

To tell the truth, it makes me want to become a policeman. Or at least play one on T.V. So this week, I decided to research the role of law enforcement by spending time with the Kaplan Police Department.

Boyd Adams was elected to Chief of the Kaplan Police Department on July 1, 2010. His duties are to protect and serve the city of Kaplan. He supervises twenty-six employees consisting of law enforcement officers, and administrative, clerical, dispatch and road personnel.

“The best part of my job is being able to serve the public,” says Chief Adams. “I also enjoy helping the law enforcement officers get the equipment they need to effectively do their job.”

Chief Adams began his career in law enforcement at seventeen as a Vermilion Parish Sheriff’s deputy for one year. He then went on to work with the Kaplan Police Department where he spent twelve years in various roles including reserve officer, dispatcher, patrol officer, patrol sergeant and detective sergeant. He also spent four and a half years with the Jefferson Parish Sheriff’s Department.

“I don’t think I could do anything else,” says Chief Adams. “I’ve done this all of my life. Once you get law enforcement in your blood, it’s hard to get out. It’s like an addiction.”

Chief Adams most memorable experience in law enforcement was when he met a troubled teen, who he would eventually adopt. The Chief’s son is now in college majoring in forensic science and ballistics.

If someone is interested in becoming a Kaplan city police officer, they should contact Chief Adams. If a position is available, he’ll arrange for the candidate to take a civil service test. If he/she passes the test, they’ll go through the hiring process, which involves a physical, psychological exam, drug test and background check. Upon completion, the candidate will attend the police academy for twelve weeks.

“The traits I look for in a candidate is professionalism and the ability to speak and work with the public,” says Chief Adams. “A potential officer should be eager to enforce the law and continuously train and learn.”

“You have to stay up on the changing laws,” says Chief Adams. “If you don’t, liability starts to play a part.”

To give me an idea of what it’s like to be a Kaplan policeman, Chief Adams let me ride around with Officer Irvin Cates. Originally from the New Orleans area, Officer Cates has been with the Kaplan Police Department for seven years.

We rode all around Kaplan through areas I’d never been before in my life. People walking down the street or sitting on their front porches smiled and waved when they saw us.

“Most of them know me from all the years I’ve been patrolling,” said Officer Cates. “It’s important to have a presence in the community so they’ll feel safe.”

Officer Cates said he had many unusual experiences as a Kaplan police officer, but one of them stuck out more than the others. It was a call to handle an alligator that was in the middle of the street.

“I don’t know what I was thinking, but I just jumped on top of it and taped its mouth shut,” said Officer Cates. “Afterwards, I found out that it was seven feet long. I probably shouldn’t have been so brave.”

While we were riding around, the dispatcher called out some numbers over the radio. Officer Cates responded with some other numbers and then we sped towards Cushing Avenue.

My imagination went wild with me and I pictured Officer Cates handing me a gun and bulletproof vest. I thought about every cop show I’d ever seen to mentally train myself how to move and shoot.

But it was only a disturbance of the peace. So I just sat back in the police car and imagined a much more interesting scenario of me crashing through a plate glass window, rolling over and shooting down three bank robbers.

After my patrol ride, I realized that law enforcement isn’t always as it’s portrayed on television. Chief Adams and his team taught me that it’s about serving and protecting the community, continuous education and enforcing the law. I thank them for this knowledge, and also for the picture Officer Cates took of me in his patrol car. I plan to use it on my Facebook page, and am sure it will lead to my own T.V. series called, “CSI: Kaplan.” 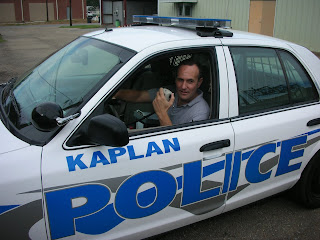