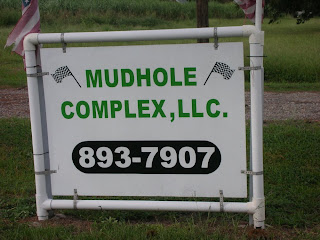 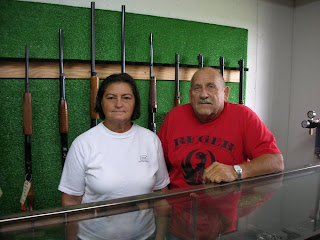 Hunting season has arrived and camouflaged residents throughout Vermilion Parish have fled for the fields and blinds to bring home dinner. Before they headed out, many of them brought their guns to be cleaned and repaired by husband and wife, Elson and Becky Duhon at Duhon’s Gun Shop

“I got into this business because I liked collecting guns,” says Mr. Duhon. “The more you like something, the easier the job is going to be.”

“The hardest part of this business is that it’s seasonal,” says Mrs. Duhon. “We get busy at the beginning of August, just before hunting season. After New Years, we slow down a lot.”

According to Mr. Duhon, automatic shotguns have a tendency of jamming and need to be regularly maintained. He says that any gun using steel shot should be cleaned after shooting around 300 shells. He also suggests cleaning all guns before putting them into storage.

“Duck hunters are famous for letting their guns get wet,” laughs Mr. Duhon. “They should dry them well after shooting them. It’s good to wipe the barrel down with 3 in 1 oil or Break Free oil. It helps prevent rusting.”

Mr. Duhon suggests a 12-gauge pump shotgun as a first gun for someone sixteen years old or older. But someone younger should consider a 20-gauge.

“You don’t want to start a young kid off with something too powerful,” says Mr. Duhon. “It might scare them, and it will be hard for them to regain their confidence and become a good shot.”

The Duhons are also the owners of Duhon’s Mudd Hole. Behind the gun shop are two large muddy fields, one for 4-wheel drive trucks and the other for 4-wheelers. For a fee per vehicle and person, interested attendees can drive around in one of the mud holes or sit on the side and watch others. 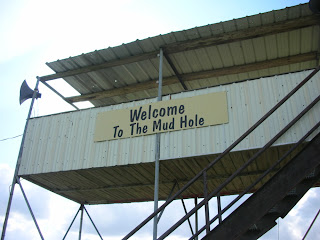 “People tailgate and watch the trucks playing in the mud like they’re watching a football game,” laughs Mr. Duhon. “It’s a lot of fun.”

Other amenities include a port-o-let, as well as a concession stand that sells hamburgers, hotdogs and drinks. The mud hole is closed for the season, but check out their website (www.duhonsmudhole.com) for info on its re-opening.

I recently visited Duhon’s Gun Shop, located in a metal building behind the owners’ home in Abbeville. The lobby is as authentic as a gun shop can be, with collector’s items like a stuffed mink, a box set of everything a child needs to be a real life cowboy (complete with bandana, cap-gun and holster), and a vintage poster that says, “Check your guns.” 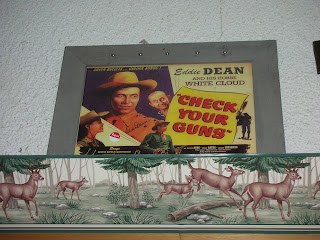 During my visit, a gentleman came in with a military rifle from 1913 that was used in World War 1. He had traded it for another gun because he liked the history of the rifle. He was having problems with his bolt, but Mr. Duhon was able to fix it in a matter of minutes.

“A lot of guns have sentimental value,” said Mr. Duhon. “People will keep the barreled action, but change the butt stock of the gun.”

Mr. Duhon showed me his first ever gun hanging on the wall in the shop. It was a Daisy Red Rider BB gun that he received for Christmas when he was ten-years old. 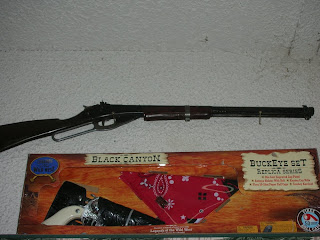 “My favorite gun to shoot with now is a Remington 700 hunting rifle,” said Duhon. “I’m not left-handed, but I like to shoot my rifle that way.”

I had to get a picture of me doing something on the interview, and hoped that it could involve driving my momma’s car through one of the mud holes. But unfortunately both of them were closed, so Mr. Duhon made me clean a shotgun instead. 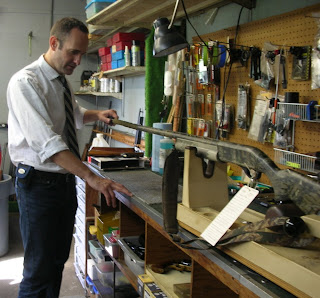 That was okay, but my favorite part was seeing Mr. Duhon’s first gun hanging on the wall of the shop. The fact that he held onto the BB gun for so long shows just how much he loves guns, and therefore his career. This lesson of loving what you do for a living was worth not being able to drive through the mud hole.