Training to be a Hero 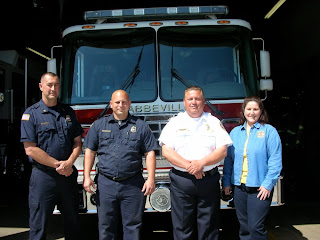 I had many different jobs in my life, and each one required some sort of training. I’ve gone to archery school, taken computer courses and sat through seminars on how to perfectly fold jeans. Most of the information was necessary, but I often found my attention wandering to other places, unconcerned with the consequences of an improperly folded pair of Levis.

But there are those jobs where being focused during training can be a matter of life and death. Take for example the fire fighter, who trains by getting in a trailer, which is then ignited.

“It’s called a Flash Over Trailer,” says Matt Suire, Assistant Fire Chief of the Abbeville Fire Department. “It trains fire fighters to read how a fire’s gases travel. This way they can prevent the flames from spreading.”

Every new rookie fire fighter trains for fourteen weeks at the LSU Fire Fighting School. In addition to being set on fire, they take classes on climbing ladders, handling hoses and using breathing apparatuses.

“The most important subject the instructors teach is personal safety,” says Suire. “When you go into a fire, you have to watch out for your partner and yourself.”

Suire started his career as a fire fighter back in 1980, and is no stranger to dangerous situations. About five years into his job, the second floor of a burning building collapsed beneath his feet. He fell to the ground floor and broke his ankle.

“Luckily there were other fire fighters inside who pulled me out,” says Suire. “Toxic gases and structures collapsing are two of the biggest dangers when fighting fire.”

According to Suire, every fire fighter is required to have twenty hours of training per month. In addition to controlling fires, the department also responds to medical emergencies. Other responsibilities include inspecting hydrants, public education and pre-fire planning with businesses.

“We keep a file on all of the commercial buildings in Abbeville,” says Suire. “Every business in town has an information sheet with a diagram of the structure. It has who to contact, and lets us know if there are any hazardous materials on the premise.”

Suire was named Abbeville Fire Fighter of the Year as a rookie, and again in 2009. He says the best part of his job is helping the public.

“I have many memorable moments with the fire department,” says Suire. “People are so grateful when we help them. It’s what I love about my job.”

I recently interviewed Suire at the Abbeville Fire Station on West Vermilion Street. While there, I met other members of the team including Fire Chief Elvin Michaud, Captain Jack Harrington, Fire Fighter First Class Brady Barras and Secretary to the Chief, Charlie Romero.

I was given a tour of the facility, which included fire proof uniforms neatly hanging on pegs, coiled up hoses and a variety of different fire trucks. One, called a Tender, holds three thousand gallons of water, and another one is equipped with the Jaws of Life. 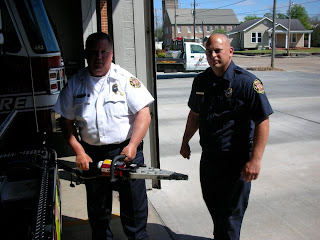 MATT SUIRE AND BRADY BARRAS WITH JAWS OF LIFE

Suire and Barras even showed me a public education trailer the department uses to teach school children about fire safety. Don’t worry parents and teachers because this trailer, unlike the Flash Over Trailer, isn’t set on fire. It does however produce smoke, and kids learn how to crawl out safely.

One of the most interesting parts of my tour was the bunkroom. Since fire fighters work in twenty-four hour shifts, they are required to sleep at the station. I love my job at the newspaper, but I’m not sure I’d be wiling to spend the night at the Abbeville Meridional. 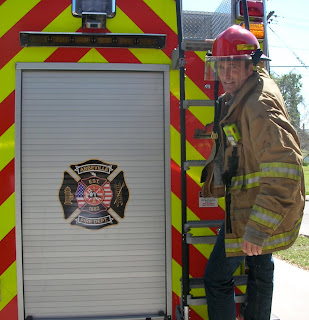 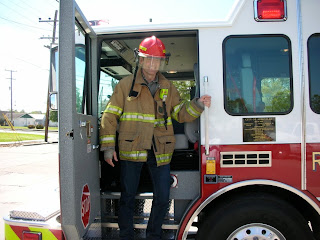 But writing is a solo profession, whereas the career of a fire fighter requires cohesiveness. Individually they are human beings with the spirit and courage to help others. It is through teamwork and their continuous training that they become most powerful and transform into heroes.

Anyone interested in becoming a fire fighter will need to take the Civil Service test. For information on dates, call 337-893-1831.
Posted by Jacques at 6:18 PM

Jack Coffee said...
This comment has been removed by a blog administrator.
12:40 PM