Strength to Maintain a Garden 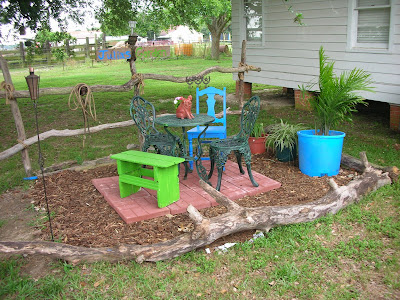 Vermilion Parish is in the middle of spring, and as you drive around you’ll see newly pruned trees and bushes, farmers plowing their fields, and citizens working in their gardens. It’s a time of preparing the ground and planting seeds in anticipation of a large harvest. For some, the reward will be as small as a few ceramic pots filled with Marigolds, and for others as large as fields blanketed in golden grains of rice.

It’s so easy this time of year to plant for the future because the weather and landscape are as beautiful as a postcard. The thought of our fruits of labor motivates us to spend money on potting soil and seeds, and to grab a shovel and dig. But as the days get longer and warmer, and the air gets thicker and wetter, and the insects start partying like it’s 1999, where will you get the motivation to maintain what you’ve planted? Where will you get the strength?

When I first moved back to Cow Island from New York, I became fascinated with my mom’s backyard and some property behind it. Even though I’d grown up back there, I’d forgotten about it and what it offered. I went from an apartment with a potted plant in Manhattan to an entire house with sixty acres of landscape, and a canal filled with snapping turtles and alligators.

I can see the property from the window in my room. When I sit at my writing desk, I often stare through the glass like it’s a television. Some days my mom will walk into my view to throw old fruit over the fence. Other days, my brothers and nephews will make guest appearances on horseback. Sometimes I’m blessed with a memory of my father.

My first spring back in Cow Island, I wanted to be in that picture. I wanted to plant things in the land and watch them grow like a thick enchanted forest. I was motivated by a desire to be part of something, and to build a gift for my family as a thank you for all the support they’d shown me over the years.

For three weeks, building the garden became my number one priority. I tilled soil, planted seeds and trees, hung birdhouses and ferns, installed a fountain, and built a fence out of large fallen branches and rope. I even laid down concrete blocks to create a sitting area where I hoped to be inspired to write.

The result was a colorful outdoor space that made me proud. My family even celebrated Mother’s Day there that year, and contributed to the garden by donating plants, and chipping in for a cypress swing. It was a success in my book, and a symbol for all that I could accomplish if I put my mind to it.

But then summer arrived, and the vision of my potential became blurred by the heat and insects. As I watched the garden from my bedroom window, weeds and poison ivy overtook areas of clear direct lines and mulch. My homemade fence built to create intimacy crumbled apart due to rotten wood and improperly fastened rope.

The hardest slap from reality though, was that by building the garden, I’d created an obstacle for a vital process in maintaining a yard; mowing. The fence, fountain and flowerbeds had made the area inaccessible for a riding mowing machine. So I had to go old school, and begin pushing a Snapper amidst heat, mosquitoes and failure.

I’d built too much, too soon. The result was something pretty, but not practical. Interesting, but not real. Bold, but not strong.

I hadn’t taken the time to get truly re-acquainted with Louisiana’s climate before I began the project. I had worked so hard to build this garden, but didn’t have the strength to maintain it or tear it apart. Instead, I watched it deteriorate from the safety and climate controlled temperature behind a window.

This year I’ve committed myself to cleaning up the obvious mess I made. I moved pots, and tore down flowerbeds so the area can be mowed again. I dusted off the cypress swing, pruned dead branches off of plants, and dropped a few seeds in places that won’t cause obstacles.

Although in some ways the first garden I built failed, I don’t regret the work. I enjoyed watching an idea come to life, and learned from my mistakes. I have cut back on my different growing areas so I am better able to focus on what’s important to me, and what will yield the highest harvest.

So in my opinion, the best way to maintain a garden is to learn about its landscape before you even plant it. Don’t let it scare you, or you’ll never reap the joyous rewards of watching something grow. Instead, arm yourself with knowledge and you will find the strength to build and maintain the chosen garden of your life.
Posted by Jacques at 5:01 AM

Remember, Jacques.... it's only failure if you DON'T learn from your mistakes!

I met you at BookFest 2008 shortly after being rendered homeless by Hurricane Gustav. I'm now about two weeks from completing construction on my new house. It's been a long, hard road home, but your comments here reinforce my commitment to doing my own landscaping (or at least the planning and designing). I'm rebuilding on the same spot I've lived for 18 years, so I know what will work and what won't. And I know what requires more maintenance than I'm able or willing to give. I won't be bullied by contractors or landscapers who push a "standard homeowner package."

Oh, and I'm having a tough time deciding where to put my writing desk--because I have fabulous views from three sets of windows! My real "dreamscape" for writing would be a treehouse where I could hole up with a laptop--but my tree-shimmying days are over. :(

But now that I think of it.... that grand old magnolia in my front yard is just begging for a winding staircase to wrap around its trunk....

Congrats on accomplishing this major challenge in your life. Remember where you were a year ago and where you are now. You had the strength to build a house. Now the rest will be easy.