The Simplest of Sounds 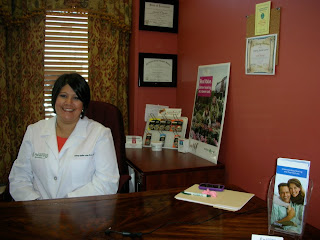 Whenever I drive my mom anywhere, she searches the side of the road for aluminum cans. She’ll tell me explicit details about them, and share her thoughts on re-sale value.

“A red smashed Coke can wrapped in a paper bag!” she’ll exclaim. “Five cents and we can recycle the paper.”

I admire my mom’s instincts to want to keep Vermilion Parish clean, and her ability to spot a nickel a mile down the road. But when I’m focusing on driving or listening to the radio or trying to explain to her that I do indeed have a job, her CAN-nouncements aren’t as endearing.

“I was in the middle of a sentence, Mom,” I’ll say louder than needed. “Please don’t yell out can thoughts while I’m speaking.”

Then I’ll feel like the worst son in the world. Guilt punches me in the stomach, and I search for the words to apologize. But my mom speaks first.

Hearing my mom’s can thoughts is something I took for granted until I interviewed Lindsay Aguilar Levier, owner and Dispensing Audiologist of Louisiana Hearing Specialists, LLC. Opened in Abbeville in 2009, the business administers hearing tests and sells a variety of hearing aids, earphones and other audio devices.

“I decided to become an audiologist after working with children at The Baton Rouge Speech and Hearing Foundation,” said Levier. “It was amazing to see them communicate in a non-traditional way. Missing your child say, ‘I love you’ is heartbreaking. I wanted to help.”

Levier has a Masters of Arts with a concentration in Communication Science and Disorders from LSU. With over ten years of experience in audiology, Levier has worked for Miracle Ear, various Ear, Nose and Throat specialists, and the Louisiana School for the Deaf.

“The most challenging part of my job is trying to find a hearing aid for someone with monetary restraints,” says Levier. “It’s very disappointing when I can’t help someone feel and hear better.”

According to Levier, the best part of her job is helping people hear the simplest of sounds that they hadn’t heard in a long time. She had one customer who had forgotten the sound of a buzzing wasp.

“My most memorable experience was with a woman whose husband was dying in the nursing home,” says Levier. “When she put the hearing aid on, she broke down in tears. Her husband died a few days later, but she was so thankful that they had those few moments together.”

Levier suggests having your hearing checked once a year. She says that you should never put anything in your ear smaller than an elbow, and that the largest threat to our hearing is noise exposure.

“The biggest complaint I get is that people can hear, but they can’t understand,” says Levier. “So I find out about their day-to-day activities in order to select the best hearing device for them. I listen to them so they can hear.”

Levier attempted to give me a hearing test by use of a Video Otoscope. A monitor displayed the inside of my ear, which looked like an underwater cave filled with mountains of gold. 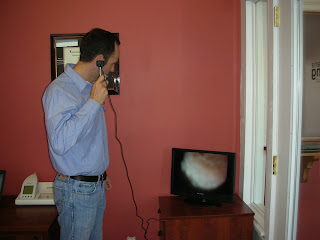 “That’s ear wax,” Levier said. “We can’t continue with the hearing test because it interferes with the results.”

I was extremely embarrassed of my improper ear hygiene, but Levier said that she’s seen her share of waxy lobes. She refers customers with gold in their ears to their General Practitioner or Ear, Nose and Throat physician.

Later that day when my mom and I were headed home, I thought about the man who had forgotten the simplest of sounds like a buzzing wasp. Although I wasn’t always in the mood to hear flying insects or about how many cans were in a ditch, the thought of never hearing them again scared me.

My mom had been quiet even though we’d past at least six cans. I missed her voice, and for some reason did something very strange.

Although my mom’s can thoughts were distracting at times, I didn’t want to ever stop hearing them. But at that moment, the simplest of sounds was on a break.

“Good job spotting the cans,” my mom said. “But if you don’t mind, I’m trying to listen to the radio.”

For more information on the services offered by Louisiana Hearing, call 337-706-8176. 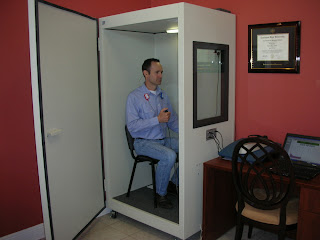 Jacques,
I truly love your stories, especially the ones about your mother. I got to visit her last weekend at Granny Love's and always enjoy our visits. She is a wealth of information and I know where you got your story telling from.