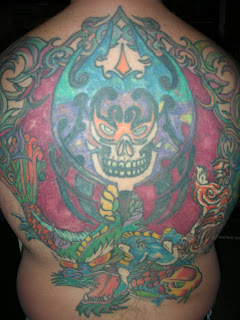 One of my favorite pastimes as a child was to apply temporary tattoos to my body, and flex my miniscule muscles to imitate the professional wrestlers on television. I’d dream of the day when I’d be compared to wrestling greats such as Junkyard Dog, and I could get real ink tattoos that didn’t wash off in the shower. But my fantasy of both ended one day when I thought about how painful it would be if someone slammed me against the rink floor and stuck a needle in my body over and over again.

As I grew older though, the art of tattooing re-emerged as one of my interest. I never got one because I didn’t know what I wanted, and because I was still afraid of the pain involved. But the symbolism and design fascinates me, and so this week I found out what it’s like to be a tattoo artist.

Crazy Cajun Tattoos, located at 2154 Charity Street at the Lafitte Mall in Abbeville, has been open since 1995. In addition to their services of tattoo design and body piercing, the business also sells an assortment of graphic t-shirts and novelty items. Zoe Crouch is the owner of the establishment, but her husband, Brian Crouch, is the manager and head tattoo artist. 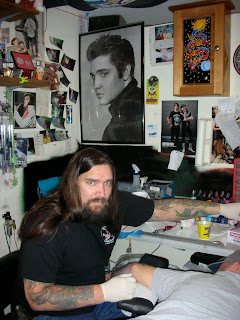 “I was an apprentice for several years at a parlor in Great Britian,” says Mr. Crouch. “I’d always been interested in art and design, but it was my time there that helped my creativity flourish.”

According to Crouch, people get tattoos for various reasons including rebellion, peer pressure or honoring someone. The most popular designs include tribal symbols, roses, tigers, wizards, dragons and coy fish.

“People can bring in their own artwork or choose from the ones we have here,” says Crouch. “If they ask me to pick a tattoo for them, I tell them to go home and come back when they know what they want. This is going to be on their body forever.”

Crouch has tattooed lawyers, doctors, judges and his seventy-year old grandmother. He says that the best part of his job is working with the customers because they are what make his business successful. But he also loves challenges.

“I’m inspired when someone comes in with a bad tattoo and wants help changing it,” says Crouch. “I like the creativity of taking something the customer doesn’t like and making it into a piece of art.”

Two of Crouch’s regular customers walked into the shop during our interview. One of them, Mike DeBlanc, has been getting tattoos for fifteen years.

Seth Broussard, another faithful customer, was there to get a new tattoo on his already ornately designed arm. He referred to Crouch as his friend and therapist.

“It’s almost like a beauty parlor at times,” said Crouch. “I’m a marriage counselor, a bartender, and a best friend.”

Crouch allowed me to assist him with the tattoo he gave to Broussard. I got to shave the customer’s arm and then apply a transfer of the artwork, an intricate design resembling a spider’s web. 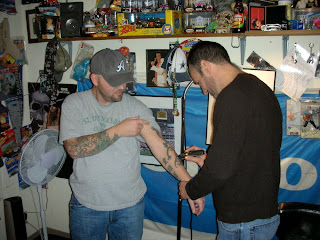 “My best advice to someone interested in becoming a tattoo artist is to apprentice under someone reputable,” says Crouch. “Also make sure that you’re inspired by their work.”

I knew going into the interview that I could never be a tattoo artist. For one, I can’t draw to save my life, and two, my hands are so shaky that if I were to hold a jar of milk for an hour, it would probably turn into a slab of butter. I couldn’t stand to think of the damage I would cause holding a pulsating needle filled with ink against a person’s skin.

But the knowledge I gained from Crouch was well worth my time at Crazy Cajun Tattoos. We all have creativity inside of us, and it’s our choice how to express it. I left empowered with the message of tolerance and being true to oneself, but also a little embarrassed that a seventy-year-old grandmother faced the pain that scared me away from ever being inked. 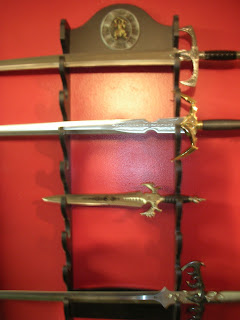 My name is.Mrs.Anna Daniel. I live in Ukraine i am a happy woman today? i need to use this time to tell all people how i got my loan from this honest and God fearing man loan lender that help me with a loan of $84,000 please contact him. if you also need a loan without any problem he name is Dr Purva Pius email {urgentloan22@gmail.com} tell him that is Mrs.Anna Daniel that refer you to he contact Email {urgentloan22@gmail.com}