Strength to be a Soldier 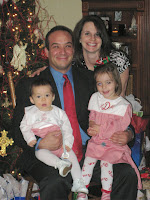 In a few days, on January 8th, 2010, Jonathan Deshotels will report for his call of duty with the National Guard. After a couple of months in Mississippi, he will head off to fight the war in Iraq for his second time. He was a single man his first term overseas, but now he will have to find the strength to leave behind his wife and two children.

“I never thought we’d still be fighting this war,” says Deshotels. “But I’m a soldier. It requires that when you get a mission, you accomplish your task.”

Once in Iraq, Deshotels will be a platoon sergeant for 25 to 30 soldiers. In order to effectively do his job, he searches for inspiration by reading leadership books about coaches, organizational leaders and our founding fathers.

“The secret to being a great leader is to know what your job is, and care about the people you are leading,” says Deshotels. “You can’t fake it or they’ll know. Soldiers become stronger from the strength their leader portrays.”

According to Deshotels, leadership requires constantly ensuring everyone’s well being because their personal life can affect their performance on the mission. He is not only the soldiers’ platoon sergeant, but he his also their friend and family.

It was a week before Christmas when I sat down with Deshotels and his family in their Abbeville home. I was there to find out where a man and his wife would find the strength to be separate for a year.

“It’s important to have the support of your friends and family,” says Deshotels. “Mine sent me two and three packages a day during the holidays when I was away the first time. I started passing them out to soldiers who weren’t receiving anything from home. It gave them strength to get through their day.”

Deshotels and his wife, Valerie have a three year old daughter named Lydia and a seven-month old son, Jules. The family plans to stay in touch via email and a Web camera a few days each week.

“I’m not looking forward to Jonathan leaving,” said Mrs. Deshotels. “But he’s been open and honest about what’s going to happen. Because of him and my family, I’ll have the strength to raise my children.”

While Mrs. Deshotels bounced their son, Julies on her knee, their daughter, Lydia danced around the living room with the innocence and energy only a child has the pleasure of knowing. The Christmas tree lit the room with a glow, and although it had been raining outside all day long, the air felt warm and secure.

I found the answer I’d gone searching for at the Deshotels home. The couple became stronger through open communication, honesty, education and the support of friends and family. As we all face the challenges and resolutions of 2010, I hope that many of you will think of the Deshotels family, and find the strength you need.
Posted by Jacques at 12:11 PM

Thanks for writing this story Jacques. It puts things in our own lives into perspective. Thanks to Jonathan Deshotels and all the other soldiers for sacrificing themselves for our freedom.

My name is.Mrs.Anna Daniel. I live in Ukraine i am a happy woman today? i need to use this time to tell all people how i got my loan from this honest and God fearing man loan lender that help me with a loan of $84,000 please contact him. if you also need a loan without any problem he name is Dr Purva Pius email {urgentloan22@gmail.com} tell him that is Mrs.Anna Daniel that refer you to he contact Email {urgentloan22@gmail.com}