A Whole Lotta Shuckin Goin On! 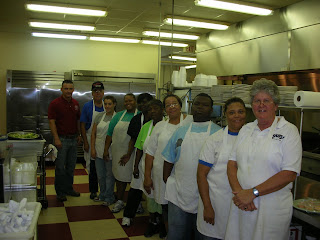 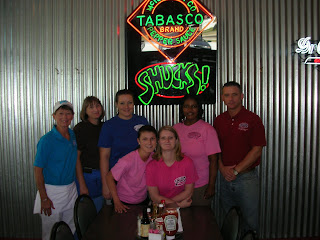 I’ve recently started searching for an extra income source so that I will no longer need to ask my mother for a share of the earnings she makes from recycling cans. I’ve decided that before I commit to anything, I’d like to see what jobs are available in Vermilion Parish, and what qualifications I would need in order to be successful in them. This week I had the opportunity to learn how to shuck a good oyster, and have a conversation with one of the two owners of Shuck’s restaurant, Bert Istre.

“He’s the hardest working man in the parish,” my mother said to me when I told her about the interview. “He owns a restaurant, a day care center and a uniform store. Listen good to what he has to say.”

I told her that I would, and then headed on to Abbeville to the restaurant. When I arrived, I was greeted by a young lady named, Courtney Picou. After I told her why I was there, she smiled and said that she used to work for the Meridional, and that she missed all the people from the paper.

“I loved working there, but I wasn’t crazy about the sales position that I had,” she said. “I prefer the atmosphere of the restaurant because customers come here wanting to be served, and I love helping people.”

Mr. Istre showed up then, and we sat down for our interview in the corner of the restaurant. From my right eye, I could see a glass room that reminded me of the Silent Booth that Bob Barker used to put the Miss USA beauty contestants in so they couldn’t hear each other’s Question and Answer session. Above it there was a sign that said, “a whole lotta shuckin goin on.”

It took me a couple of seconds to put two and two together, and I felt a little ignorant when I did. But then I was relieved that I’d realized my mistake before I asked Mr. Istre if they were going to have a beauty pageant in the restaurant.

Instead I asked him how long he’d been in the restaurant business. He told me that twenty years ago he started as a dishwasher and grass cutter at Golden Corral. He worked his way up through the ranks and eventually became the owner of the restaurant in Abbeville.

“I’ve been working in this industry for most of my life,” Mr. Istre said. “I love the hustle and bustle of the employees, and watching the customers enjoy themselves.”

Mr. Istre said one of the toughest parts of the business is the constant upkeep and maintenance of the equipment. He said it was vital because if something like a stove breaks, it can shut down operations.

“It’s like having a stick thrown in the wheel of a bicycle,” he said.

My brother Jude did that to me when I was a kid, causing me to fly into a ditch and scar my knee, which ended up ruining my chance of ever being a professional leg model. But I didn’t tell that to Mr. Istre because I figured he’d think it was a little weird and ask me to leave.

So instead I asked him what qualities he looked for in an employee. He responded that he looks for people who are well groomed, courteous and makes the customer feel at home.

“To be successful in this business, you need to have a desire to serve people and make them happy,” he said. “Otherwise you’ll be miserable.”

“I don’t like to be rushed, or sweat,” I said. “Would this be a problem if I worked in a restaurant?”

Mr. Istre laughed and said, “Yes. A very big one.”

Unfortunately, I wasn’t able to meet the co-owner of Shuck’s, David Bertrand. Mr. Istre told me that his partner also worked in the restaurant industry for a number of years. He is the former owner of Bertrand’s Drive Thru, and Bertrand’s Riverfront.

“David’s a great guy,” Mr. Istre said. “I love having a partner because it gives me a little flexibility in my schedule, and gives me a chance to spend time with my family.”

I knew that in order to get the full experience of what it would be like to work in a seafood restaurant, I’d have to get my hands a little dirty and possibly break a sweat. So I asked Mr. Istre if he could teach me how to shuck an oyster.

He gave me an apron and led me to the door of the glass room in the corner of the restaurant. He handed me one rubber glove and a utensil that looked like a knife without a point, which I found out later is called a shucking or oyster knife. Then we walked inside the room, where two piles of oysters were laying on a bed of ice. 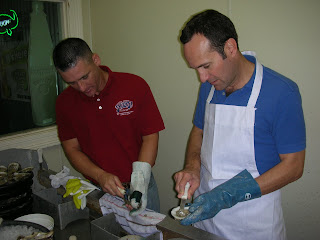 Mr. Istre grabbed one from the pile in front of him, and said that the first thing I needed to do was find the opening between the shells, and then use the shucking knife to pry it open and break the seal. He said I should then run the knife along the edges of the oyster, around to the other side.

I figured I should try to catch up, and so I stuck the shucking knife in the hinge and tried to pry it open. It wouldn’t budge, and so I looked for a hammer. But I didn’t see one, and so I rested all of my weight on the handle of the shucking knife, causing the oyster to slip out and fall on the floor.

He only had two oysters left in his pile, and even though I knew I couldn’t win the imaginary shucking contest I was having in my head, I knew my restaurant experience wouldn’t be complete if I didn’t shuck at least one. So I picked the oyster up off of the floor and watched Mr. Istre finish his final two and then start on my pile. Then I used his wrist technique and pried open my first oyster, and gave it a complete shucking.

When I got home from the interview, my momma called me over to her chair in our living room. She asked me if I’d spoken to the hardest working man in Vermilion Parish and if I’d learned anything from him. I told her that I learned a person needs to have a desire to do something in order to be successful. I let her know about the young lady I’d met who taught me that not every job is for everybody, and that’s okay because we all have to find our own way.

“But most importantly,” I said. “I learned that you need a strong wrist to get a whole lot of shucking going on.”

My mother stood up from her chair and then folded her arms in front of her. Then she picked her left arm up in the air and blinked her eyes.

Shucks is currently looking for an Oyster Shucker. If interested, apply in person or call 898-3311 and ask for David or Bert.
Posted by Jacques at 1:27 PM