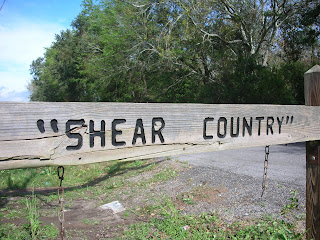 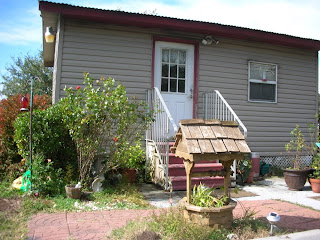 This crazy economy has taken its toll on my bank account, so I’ve hit the roads of Vermilion Parish to find out what other sources of income are out there. So far, I worked as a Maytag Man, and learned how NOT to shuck an oyster. This week, I decided to visit one of the most interesting, yet dangerous places for a man to be; my mother’s beauty parlor.

Sheer Country by Angie LeMaire is a one-chair shop located on Highway 14 between Kaplan and Gueydan in the quaint community of Mulvey (my sister-in-law is from there). I had been on that drive many times as a kid, but never realized the beauty of the continuous roadside prairie decorated with ranch style houses and fields of grazing cattle.

When I saw the green and white sign advertising Le Doux’s Jumps and More, I knew it was time to take a right on Hemlock Lane to get to Angie’s shop. About a mile later, I came to the little brown building with a sign that said, “Sheer Country.”

“Angie’s so nice,” my mother said to me when I told her about the interview. “I love going there every week because she’s like my family. Don’t write anything bad about her or I’ll have to find another beauty shop.”

I know that the fastest way to get kicked out of my mother’s house is to steal her aluminum cans, or insult one of her beauticians. So I have spent more time than usual on this article in order to avoid offending Angie in any way.

But it isn’t hard to write nice things about her, because she truly is one of the sweetest people I’ve ever met. When I called Angie earlier that morning to ask if I could interview her, she seemed a little nervous. I wanted her to be relaxed when I interviewed her, so I asked if I could get a haircut.

“Sure,” she said. “Just come a few minutes before your mom’s appointment, and I’ll squeeze you in.”

When I walked into her shop, she hugged me and said it had been a long time since we’d seen each other. She pointed out of the back window of the shop at the home she and her family recently rebuilt.

“Our old house burnt down just before the holidays last year,” she said. “We just moved into the new one a few months ago.”

Angie told me to have a seat, and then asked me how I wanted my haircut. I had memorized some of my questions, so I could secretly interview her and decided that the best way to do this was by being causal.

“Make the sides short,” I said. “And oh yeah. How long have you been in the beauty business?” 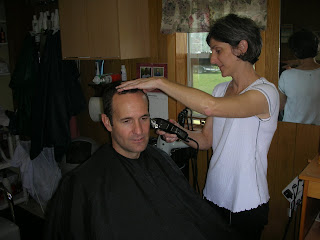 Through my secret investigation, I found out that Angie’s owned her shop for five years, but has been in the beauty profession for over twenty. She is a graduate of Abbeville Beauty Academy, and has worked at several salons throughout Vermilion Parish.

“Can you thin out the top?” I asked. “And how long was the training?”

“The program was about a year,” Angie told me.

I thought about that for a second, and realized that being a beautician probably wasn’t the best choice for me, because I needed an immediate source of income. I couldn’t afford to study for a year, let alone the tuition to beauty school. But Angie had already begun cutting my hair, and so I figured I might as well continue with the interview.

“Callie was a hair dresser too,” my mother said to me.

“Well, good,” I said. “So I’ll ask the two of you. Can you share a secret for great hair with the people of Vermilion parish?”

Angie said it’s important to remember that what you put into your body affects your hair. She said to eat healthy, and experiment with different products. That made sense to me, but I figured that two hair secrets were better than one, and so I asked Ms. Callie if she had any.

“Start with a clean head of hair,” she said. “And buy good products. You’re not saving any money if the cheap ones don’t work.”

Angie finished my haircut, and I told her to go ahead and put it on my mother’s tab because she was making all that money from recycling cans. My mother scrunched her face up at me like she’d eaten a lemon, and then walked over to the shampoo chair and sat down.

“So, Angie,” I said. “Do you have a most memorable moment from working in this profession?”

Angie leaned my mother back in the chair, and turned the nozzles on the sink until water poured out of a fixture resembling a small showerhead attached to a hose. She took a deep breath, and then looked down at the ground.

“I’d have to say it was after our house burnt down,” she said. “I started working again the next week because I needed an escape from everything that was going on. When I was at the shop, I felt like I had a huge family who was there for me to talk. It was my therapy, and my customers helped me get through that tough time in my life.”

I began to understand why my mother enjoyed coming to Sheer Country each week. It was a place to talk, and be amongst friends and family. Something that I’ve learned we all need in order to lead happy and healthy lives.

I promised my editor at the Abbeville Meridional that I would try every job I went to, and since I didn’t think anyone would trust me to cut their or put it up in rollers, I figured the only thing I could do was shampoo someone. But I wasn’t sure if I felt comfortable doing that to Miss Callie, who I’d only met a few times. So I looked down at my mother, who was reclining in the chair of the shampoo sink.

“I never thought I would ask this question in my life, Angie,” I said. “But would it be okay if I washed my mother’s hair?”

Angie told me that she would start the process because the hose was a lot harder to operate than it looked. She put a couple of squirts of shampoo in her hand, and then rubbed my mother’s head until it was white from the suds.

“Your turn,” Angie said. “Massage the scalp. You want to get the hair clean, but you want the customer to enjoy it.”

I closed my eyes and put my hands on top of my mother’s head and massage it the way Angie had told me to. I thought to myself that it felt nothing like it did when I shampooed my own head. Then I opened my eyes and saw my mother staring up at me.

“You’re fired,” she said. “And I recycle cans to save the earth. Not to pay for your haircuts.”

For more information about training to become a beautician, call Louisiana Technical College at 893-4984. For info on recycling cans: Abbeville Scrap, Ph: 523-9322, Address: 723 AA Comeaux Memorial Drive.
Posted by Jacques at 7:07 AM

What a bonding experience,washing your mothers hair. One day you'll be able to write a book about all your stories with your mother. I'm sure it would be a best seller...