The Wonderful Town of Erath

Before you begin reading, I should warn you that I wrote this article before July 4th. You may now read on. 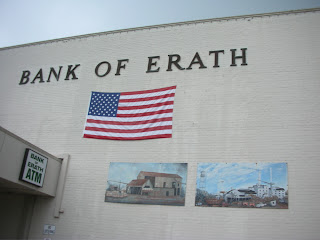 Independence Day is right around the corner, so I thought it might be a nice time to visit Erath, which is famous for its 4th of July celebration.

I had arranged with Mr. Warrin Perrin to meet someone at the Acadian Museum for that afternoon, but drove into Erath early to have some lunch. I noticed a sign for a place called, “Museum Café,” and so I decided to check it out.

When I walked in, I saw about five or six people sitting on stools next to a long bar. They all turned and looked at me at the same exact time, and I froze and felt like a kid does when he thinks he’s just been caught doing something wrong.

“Can I help you?” a blonde woman standing behind the bar smiled and asked.

“We don’t serve food anymore,” said a gentleman standing next to the woman. “But you can go over to Champagnes and get a plate lunch and come back here and eat it.”

The rest of the crowd encouraged me to do the same thing, and then started introducing themselves. It began to rain outside, and so I decided to take a seat along the bar. The gentleman who had told me I could go and get a plate lunch introduced himself as Sonny Moss.

“Are you Mike’s brother?” another gentleman asked. “Tell him Cowboy said hello.”

Then he raised his hand to the blonde woman behind the bar and told her, “Cynthia. Get my boy here some orange juice.”

Although I like orange juice for breakfast, I wasn’t craving it just then. So I turned to ask if I could get a Coke. But before I could speak, Cynthia put a brown bottle down in front of me.

“That’s what we call orange juice around here,” Cowboy said. 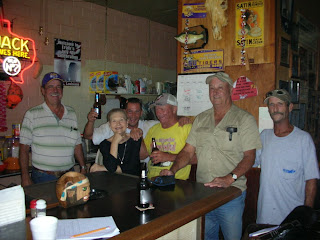 Mr. Moss asked me what I was doing in town, and I said that I worked for the Abbeville Meridinal and was writing a story about Erath. He grabbed me by the arm and told me to follow him. We walked around the room while he pointed out antiques varying from musical instruments to wooden farm tools to an actual ice-box. Then he pointed out a large mural painted on the wall behind a stage.

It was getting time for me to head to the museum then, and so I thanked everyone for their friendliness and hospitality. They smiled and waved, and told me that I needed to stop by again soon.

When I stepped around the corner, a man standing on the other side of the street was staring at me. I didn’t recognize him, but he screamed my name out and walked towards me. He introduced himself as Carlin Trahan and told me that he’d be my guide in the museum.

He opened the door of the building and I followed him into a small room, which was filled with photographs and documents explaining the history of Erath. Within a few seconds, I heard a bell ringing in the same cadence as a telephone. My eyes found the source, which was an old wooden phone similar to the ones in television shows such as Andy Griffin and Petticoat Junction.

Mr. Trahan walked up to the antique phone and picked up the receiver and spoke into the mouthpiece coming out of the wooden box. At first I thought that he was playing a joke on me, because I couldn’t believe that the phone really worked. But I watched him have a conversation with someone, and that’s when I knew this man was serious about history and keeping things authentic, and that I had great admiration for him. 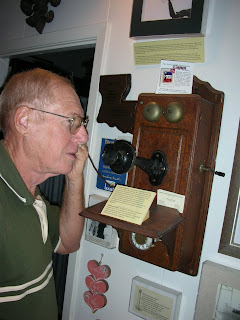 Mr. Trahan brought me into another room, which not only had a painting of the famous Beausoleil Broussard, but was filled with books, music and videotapes about Acadian Culture.

“There’s even a computer here so people can research their ancestry,” said Mr. Trahan. “Did you know that Couvillon isn’t of Acadian descent?”

I felt like the wind had been knocked out of me because of what he’d said. I had been identified as a Cajun by many of my friends in other states, and I wondered if Mr. Trahan would make me call them and announce that I had been living a lie. Then I remembered that my grandma was a Broussard, and I breathed a sigh of relief.

“My grandma was a descendant of Beausoleil,” I said. “So that still makes me a Cajun right?” 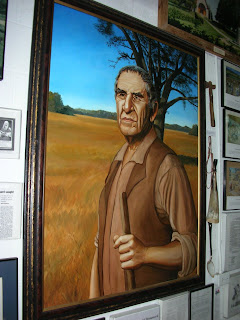 We discussed everything from the difference between a “Creole,” and a “Cajun,” to the origin of gumbo. I could have spent several hours in the museum talking to Mr. Trahan, but sadly had to leave to do some research on the 4th of July Celebration.
Mr. Trahan suggested that I call a man named Robert Vincent, who told me that although he knew the first festival was before World War II, he wasn’t sure of its exact date.

“There weren’t any festivals during the war,” he said. “But in 1946, the town started them up again and made them annual.”
Mr. Vincent told me that in addition to a week filled with live music and carnival rides, Erath would host a fireworks display and parade on the 4th.

“We’ll also have a water fight between local parish fire departments,” Mr. Vincent said. “It’s a lot of fun to watch grown men try to knock each other down with a hose.”

When I sat down to write this article, I wondered which aspects of my visit I should share with you. I didn’t know if I should focus on the culturally rich community, or the friendly people who enjoy life and take great pride in the place that they call home. When I looked at my notes and thought about my afternoon, I realized that the best way for me to really tell you the story of the wonderful town of Erath, is to suggest you visit this jewel yourself.
Posted by Jacques at 5:22 PM