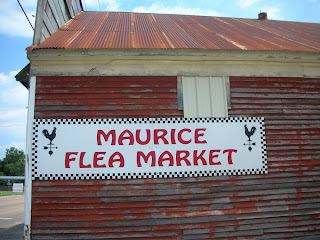 From the day I got my license to only a few hours ago, my mother told me not to speed when driving through Maurice. She said her sister had gotten a ticket there and she’d heard there had been others.

I knew my mother was correct, because I’d often seen police cars patrolling the area when I drove through town. When I was a teenager, I used to dream about speeding through at 55 just to see if I would get caught. I would always chicken out about fifteen feet after I passed the 40 MPH sign, and was only able to reach a maximum speed of 43 and a half.
When I drove into Maurice this week, I saw a big flashing sign in front of G&H Tires that said, “Slow Down. 40 MPH.”

I immediately pressed on my brakes because I wasn’t feeling as rebellious as I did in my teen years, and I didn’t think the interview I’d hoped to have with Mayor Ferguson would go well if I got a speeding ticket. I wanted to speak to him because my editor told me that Maurice was doubling in size and was going to grow from a village to a town.

“According to a 2000 census, our population was 643 people,” said Mayor Ferguson. “It’s estimated that number will double by the 2010 census. Because of this growth, Senator Nick Gautreaux is helping us to find a way to build our own civic center.”

I asked Mayor Ferguson if he’d heard that Maurice was known for being tough on speeders. He said yes, and although he didn’t want the village to be known as a speed trap, the police would continue to enforce the law.

“Approximately forty thousand cars drive through Maurice each day,” said Mayor Ferguson. “We want to ensure they do it safely.”

It was getting near lunch, and so I thanked the Mayor for taking the time to speak with me and then I headed over to one of my favorite places to eat, Villager’s Café. I had my first experience with their fried shrimp po-boys about a year ago when I was driving through Maurice from Abbeville to Lafayette. I had planned on eating it at a later time, but it smelled so good that I had to take a bite. By the time I got to that traffic light where the McDonald’s is, I’d eaten the entire twelve inches. It was life changing because I realized that I could never eat a po-boy outside of Louisiana again. 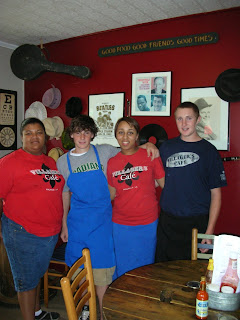 The café was packed, but I managed to find a table. I’d eaten inside before, but on that day noticed for the first time that the tables were made from old wooden spools, which were once used to hold coils of steel wire. I looked around at the walls, which were decorated with items such as vintage hats, pictures of Lucille Ball and a sign that said, “Good Food, Good Friends, Good Times”. The room was filled with families, friends and a table of construction workers eating salad.

“Salad?” I thought. “I didn’t even know they had salad here.”

It looked really good, but I decided to stick with old faithful and ordered a fried shrimp po-boy, which I ate in about three minutes.

My next stop was the Maurice Flea Market. I was greeted by the owner, Cynthia Trahan, who told me that she represented thirteen different vendors who sold items such as Victorian furniture, depression glass and antique jewelry.

“Where are you from?” Ms. Trahan asked me.

I told her that I was from Cow Island and she asked me if I knew a couple named Rita and David Faulk. It was a strange coincidence because I had just seen them the night before. Ms. Trahan told me that the Faulks had a booth in the flea market, and showed me some of their original pieces, which they had designed and built together. My second favorite item was a hat rack made from recycled hammer heads. But my favorite was a magazine holder made from a wooden sawhorse, which I bought and plan to have Rita and David sign for me. 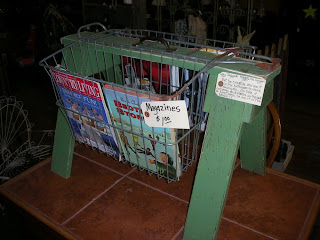 The last stop on my trip was the Vivian Alexander Gallery, which is a little outside the city limits in Milton. A gravel road led me up to an unpainted wooden building, which resembled some of the majestic old barns on the farms of Vermilion Parish. In front of, a green pasture surrounded a grand metal sculpture, which Alexander Caldwell (The Alexander in Vivian Alexander) had designed and built himself.

Vivian Alexander is the designer of objects such as time pieces, sculptures and purses, which are inspired by eggs, and are craved by art collectors around the world. Each piece is signed by the artist, and one of them was featured in the movie, Ocean’s 12.
I got a chance to sit down in the middle of the gallery and speak with Mr. Caldwell himself. He explained that his girlfriend was the Vivian in the gallery’s name, and then told me about when he’d first moved to Milton.

“I moved to Vermilion Parish from Baton Rouge because I was ready to live in paradise,” said Mr. Caldwell. “My girlfriend and I became farmers and we had geese and chickens and ducks. We had all these eggs and Vivian suggested that we decorate them. The rest is history.”

I imagined the two of them wearing aprons and dipping eggs into mugs filled with Easter Egg dye like my brothers and I did when we were children. Out of the corner of my eye, I could see a beautifully decorated goose sized egg, which was also a clock. It was so brilliant, I pretended in my mind that he gave it to me because I wanted to imagine what it would be like to be able to see it everyday.

“I’m not sure I understand what you mean,” I said. “How did designing these pieces of art get rid of your eggs?”

Mr. Caldwell explained that the objects in his gallery weren’t only inspired by eggs, but many of them were actually eggs, which had been covered in a thick enamel. Some of his first pieces hadn’t been covered though, which was amazing because the shell had been intricately carved into designs similar to the patterns in lace.

It was one of those moments when I wished my mouth had a rewind button. I was so nervous about interviewing this incredible gentleman and artist, that I wasn’t using my brain filter before I spoke. I couldn’t understand how he’d created some of the patterns in the shell without breaking it, and was trying to show how impressed I was. But I began to feel embarrassed, and wondered if Mr. Caldwell would ask me to get off of his property.

Luckily, in addition to the gift of talent, he also has the gift of humor and laughed and said, “No. I was an engineer by trade. I always had a creative side and one day decided to turn to it.” 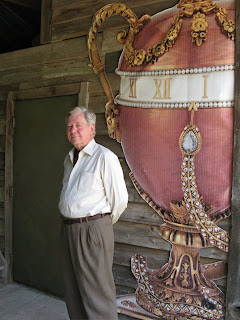 Mr. Caldwell told me that the gallery teaches classes to those interested in creating their own decorated eggs. I told him that I would probably take one this fall and asked if it would be okay if I brought a picnic and sat out in the pasture near the metal sculpture. He said that he’d welcome anyone who wanted to walk around and enjoy the property, but that he’d appreciate it if they called first so he could make sure the lawn was cut.

I wondered if I should ask Mr. Caldwell if he’d ever gotten a ticket in Maurice, but remembered something Mayor Ferguson had told me. He’d said that speeding laws needed to be enforced in order to keep citizens safe, which I agreed with completely. But I also realized that another reason to slow down when driving through this huge village, which will soon be a small town, is to experience innovative art, life changing cuisine and the friendliness of the people who were ready to live in paradise.

For information on the Vivian Alexander Gallery, check out their website at www.vivianalexander.com or call 898-0803. .
Posted by Jacques at 4:36 PM