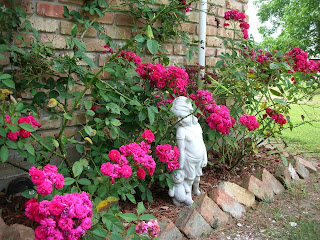 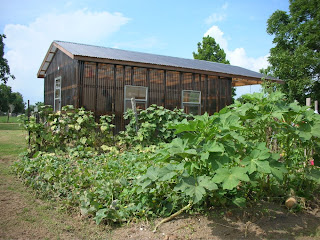 Several years ago when it was time for me to head out into the world and find my place in life, one of the things I had trouble with was being true to myself. There were so many things I didn’t understand, and it terrified me and caused me to make major decisions without much thought. Over time, I suffered from the effects of sudden change, until I realized that I needed to set goals and not be afraid of hard work if it was something that I truly wanted. This week I visited Lorraine and Harvey Broussard of Forked Island, who have learned similar lessons, and taught me others by sharing their own version of a garden.

When I pulled into the driveway of the Broussard’s home, Mr. Harvey was mowing the yard and Ms. Lorraine was tidying up in the garage. She hugged me as soon as I got out of my car and told me it was good to see me again. I had spent many of my high school days at their home because of a great friendship I had with one of their daughters, Dana.

“Did you make Mr. Harvey mow the yard because you knew I was coming to interview you about your garden?” I asked.

“No,” she laughed. “You just happened to come on his mowing day.”

She invited me inside her home to sit down and then asked me why I wanted to interview her. I had gone to her house a few months before and noticed that in addition to several plants and flowers throughout the yard, she had a greenhouse. I had always loved walking through the structures because the plants seemed to be enjoying themselves like they were at a horticultural ho-down that was by invitation only.

“You have a greenhouse,” I told Ms. Lorraine. “That’s pretty unique and I’m trying to interview people with something a little special in their garden.”

Unfortunately Ms. Lorraine’s greenhouse was empty, because being that it’s summer, she moved everything out and planted it in the yard. However, she did show me some great pictures of flowers, plants and vegetables she had grown in the green house, which reminded me of another exclusive plant party which I hadn’t been invited to.

“About 95% of the plants in my vegetable garden and yard are from seeds and cuttings I grew this winter,” she said. “That’s what I enjoy most. Creating life.”

Mr. Harvey walked in and told me hello, and leaned against the back of a chair. I told him that I was there to interview Ms. Lorraine about her garden, and then wondered if I was mistaken about the true owner.

“Well,” Ms. Lorraine said. “It’s his yard, my greenhouse and our garden.”

We walked around outside so I could take a few pictures, and I realized that the Broussard’s garden wasn’t limited to a small square patch of cucumbers, okra and bell peppers. It was their entire fenced in yard, which seemed to be around four acres in size. The property was landscaped with an assortment of trees consisting of Cypress, Magnolias, Pecan and Sycamores.

“Oh yes,” Ms. Lorraine said. “Look above the trees at what Harvey built.”

I looked around the skyline and noticed several anti-bellum style bird houses with scenic views of the surrounding landscape. Ms. Lorraine told me that hundreds of Purple Martins lived in them, and she enjoyed hearing them chirp and sing while she was working outside. But many of the birds seemed to prefer the lower lying amenities of the Broussard’s yard, which were flowers, fountains and statues spread throughout the property.

Ms. Lorraine said the greenhouse had just been built in Fall of 2007, and I asked her what she’d learned from the experience of working in one. She told me that people had warned her of how hard it would be to maintain, and that they were right.

“It’s important that you set goals and love what you’re doing if you want to succeed,” said Ms. Lorraine. “I told myself that I would donate the vegetables I grew to the church for its annual fete. Every time I felt tired or discouraged, I thought about my goal and continued to work.”

But Ms. Lorraine told me that she enjoyed every minute of being in her greenhouse. She liked to turn on her radio and travel to her own world, which in her opinion was the best medicine to cure a bad day and to lead a happy and healthy life. Ms. Lorraine said she’d learned from her mistakes like one she’d made with her Bleeding Heart, which she’d put inside the greenhouse during the winter.

“This Spring it didn’t bloom as full as it usually does,” she said. “I think it needed to grow dormant and rest before it could come back to its fullest potential. Not all plants are the same, and you can’t make them something that they’re not.”

I asked Ms. Lorraine if she had any technical advice for someone with a garden. She said that her Grandma Des had told her to throw soapy dishwater on roses to help get rid of insects and disease.

Although I had gone to the Broussard’s home to interview Ms. Lorraine about her greenhouse, I realized that I had stumbled up on something much more. I had found a place where a couple worked together to create their own version of garden, and used it as a guide to help them live the life they imagined.

Being on the Broussard’s property reiterated many of the tough lessons I’d learned out in the world, (Except for throwing soapy dishwater on roses) and taught me a few others. I learned the importance of being independent, but also of appreciating the value of help from those you trust and love in order to create something much larger than a four acre yard with vegetation and a greenhouse. Lorraine and Harvey had created a haven, which illustrated the beauty of learning from mistakes, having goals, and being true to one’s self when pursuing a life of happiness.
Posted by Jacques at 1:18 PM

Your blog is very helpful to me.I have got good and useful information about travel,vacation rentals and villases.And it it can be help for tourists also.For villases I suggest florida villas, It has situated in United States Of America.
Visit us http://florida-vacation-rentals.blog.com/