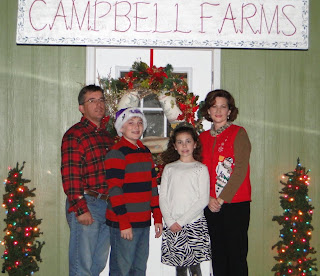 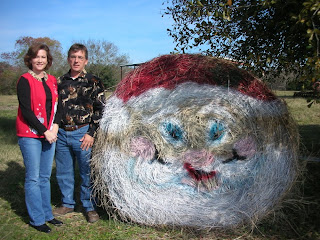 Like many rice farmers in southwest Louisiana, Hampton Campbell of Gueydan wanted to make the most out of his career. After eight years of farming a commodity rice, he decided it was time to look for other opportunities.

“There is too large of an investment involved in farming to just leave it,” says Campbell. “I needed to diversify, so I began looking for a product to satisfy a niche market.”

Campbell planted twenty acres of an aromatic rice called Della, which also has the nickname of “popcorn rice.” It looks and cooks just like regular rice, except for its aromatic scent of popcorn. According to Campbell, it was developed by Louisiana State University in the 1970’s.

“I started selling it at arts and crafts shows,” says Campbell. “Many people aren’t familiar with popcorn rice. But after they taste it, they usually buy some.”

Campbell Farms is owned and operated by Hampton Campbell and his wife, Alison Campbell. In addition to gourmet rice in two and five pound bags, the specialty food company also sells hot sauce and packs of red beans and popcorn rice. Mrs. Campbell has also collaborated with skin care professionals to create a product line consisting of soap, lotion and bath formula made from goat milk and rice. 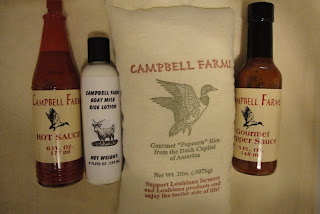 “I read in a magazine that rice was good for the skin,” says Mrs. Campbell. “So I tried some in my bath water and it made my skin feel so soft. That’s when I decided to produce my line.”

Mrs. Campbell mills her husband’s popcorn rice into flour and sends it to a skin care professional who mixes it with the goat milk soap and lotion. It is unscented, but filled with herbs and vitamins.

“The best part of running this business is that we get to do it as a family,” says Mrs. Campbell. “Our son and daughter work with us at the arts and crafts shows.”

Campbell Farms sells approximately 50,000 pounds of popcorn rice per year. The gourmet food products are sold on their website and in stores throughout the U.S. In Vermilion Parish, the rice is available at Robies in Abbeville, Larry’s in Kaplan, and Marceaux’s and G&H in Gueydan.

I drove out to Campbell Farms last week to find out more about the popcorn rice farm. I didn’t know what to expect, but imagined fields of golden grains slightly blowing in the wind until they burst into white buttered kernels creating a snow-like storm that came from the ground instead of the sky.

You can imagine my shock and disappointment when it wasn’t anything like that; partly because the rice had been cut several months before, and partly because my expectations were insane and probably the result of not sleeping enough and sometimes eating expired dairy products.

But Mr. and Mrs. Campbell were so much more welcoming than a snowstorm of buttered popcorn. They greeted me outside of their newly built office and facility that was beautifully decorated with miniature Christmas trees and a holiday wreath made with bags of rice. Just next to it was a giant bail of hay with the face of Santa Claus painted on it.

After getting a rundown of the business, I sat down with the Campbells for lunch. Mrs. Campbell prepared a pack of the company’s red beans and popcorn rice. The grains were white and tasted similar to regular rice, but were a little bit fluffier, and paired very nicely with the beans.

During lunch, Mrs. Campbell shared the story of a favorite customer, a woman who purchased some of the popcorn rice because her late husband had enjoyed it. The widow was very appreciative to the Campbells and said that when she ate the rice, it brought back pleasant memories with her husband.

“It’s rice that brings the family together,” said Mrs. Campbell. “We serve it for most meals, and we sit around the table to eat it as a family.”

To learn more about the gourmet food products and specialty skin line offered by Campbell Farms, call 337-536-7052 or visit their website at www.campbellfarms.com.
JACQUES BAGGING RICE 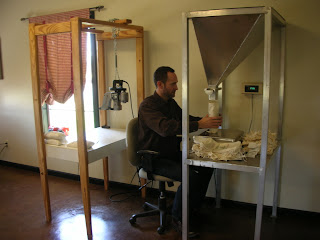