Just wanted to give you a work in progress of my momma's back yard. When I started this project, I didn't really think it would be all that hard. Between the poison ivy, snakes, my momma asking me why I keep putting all that junk in her back yard and my brothers and sisters looking into committing me, it's been quite a challenge. I did get them to chip in for a cypress glider (kind of like a swing)for Mother's Day, so even though they think I'm crazy, they're being supportive. I know the garden still needs some work but I feel like I'm getting closer. It's a garden after all, which takes time to grow and flourish. (spelling?) Which I guess is kind of like life. You don't just wake up one day happy and fulfilled. You need to keep working at it and plant new things and experiment. And just like my momma's garden, even when you think it's finished, there's always going to be something else to do to maintain it. Enjoy the process and one day, it will pay off. I'm learning that all those years of struggling and torment and hating who I was, were part of the process of creating the garden that was right for me. I think that's what I'm learning while I'm building this garden. That and to always wear long sleeves when pulling poison ivy off of the oak tree in the back of my momma's house.

In this next video, I realized that I said, "These cats aren't adorable when you have to wipe their chicken crap off the bottom of your shoes." Don't know why I thought cats produced chicken crap but didn't have time to re-shoot.


In this next clip, I noticed I caught a shot of our dog, Buster, treating himself. Didn't mean to do that. 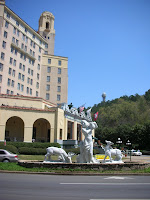 I just got back from the Arkansas Book Festival where I said the word, “prostitute” in front of Kimberly Willis Holt (National Book Award winner) and 9-year old children and their parents. Enough said.

It just happened, like when you’re trying to release a little gas and something else comes out. There is no easy way to clean that up. It’s there and you just have to be conscientious of it and try to move around as little as possible. That’s what it felt like when the word, “prostitute” came out of my mouth.

You see what happened was, I was trying to come up with a funny profession. I was explaining to the audience that my father was a farmer. When I first left Louisiana and told people my father’s profession, they usually asked, “A former what?” At first I thought they were making a pun and so I laughed. But then I realized that they thought I had said the word, “former” instead of “farmer”.

I still don’t hear the difference between the two but for some reason when I said my, “father was a farmer” when I was speaking at the Arkansas Book Festival on Saturday, I decided to explain that I was not saying the word, “former.” I thought I could turn it into a little joke and so I said, “He was a farmer like a cattle farmer. Not like a former something. I mean he wasn’t a former prostitute or anything.”

Again, I wasn’t trying to work the word, “prostitute” into my presentation. I was just trying to come up with a funny profession. Only I couldn’t think fast enough and so I said the first thing that came into my mind. And that word was, “prostitute”.

Now, Freud might say I have issues. Others might say I’m an idiot. And some may call me a pervert and dirty birdy. The truth is, I am none of these. I am a victim of watching, “Pretty Woman,” on TBS earlier that morning.

That being said, my trip to Little Rock was awesome. The people are so nice and the city itself is beautiful. And the design of the Clinton Museum is great. If you’re looking for a little driving getaway, I’d say definitely visit Little Rock during the spring. I don’t know what it’s like in the summer, fall or winter. I also stopped off in Hot Springs, which was another cool surprise. (Picture above next to Julia Roberts and Richard Gere.) It used to be a resort town and so there are some beautiful old hotels and baths. I used to go to thermal baths in Switzerland and they’re amazing. It’s just nice to be in water without chlorine or salt and it makes your skin feel great. I didn’t go to the baths in Hot Springs because I didn’t have time but I plan to visit again. I did make the mistake of trying to take a sip from one of the fountains of hot springs. I didn’t realize that the water temperature was 120 degrees and so I scalded my mouth and had big red mark all around my lips for the rest of the afternoon.

While at the festival, I met Kimberly Willis Holt. She’s a young adult writer and won The National Book Award for “When Zachary Beaver Came to Town”. It was so weird because she walked up to me when I was at the buffet line filling my plate up with some mini quiches.

She said, “Excuse me. I’m sorry to bother you. I’m Kimberly. Would you mind signing your book for me?”

I looked down at her name-tag and saw, “Kimberly Willis Holt.”

I had heard her name numerous times before. Every time I walked into a bookstore, the owner handed me one of her books and told me that I should definitely read her books because she’s one of the best writers in all of Louisiana.

When I saw her name tag, I put down my plate of mini quiches and pointed at her and said, “But you’re Kimberly Will Holt.”

She smiled and said, “Yes.”

So I pointed at her again and said, “But you’re Kimberly Willis Holt.”

But Kimberly is much cooler than M.J. She is the nicest woman in the world and was the highlight of a great weekend. Hope all of you are doing well.

Jacques
Posted by Jacques at 8:26 AM 4 comments:

This is just video footage of my momma's back yard. I'm trying to fix it up a little so she'll use it more. The only time my momma every goes back there is to feed her cats or throw away pieces of fat that she cut away from packages of T-Bones.

She cooks T-Bones for me 7 times a week. I've never seen so many T-Bones in my life. We have our own cattle and I think my momma thinks she needs to eat every last one before she dies. There's two of us in that house but we have two refrigerators and three deep freezers. They are all packed with cheese, butter, packages of bacon, gallons upon gallons of ice cream, pork sausage, pizza rolls, pizza pockets, pizza snacks and pizza. Then stuffed in every crevice available are packs of beef, including T-Bones.

You remember that story in the bible about two brothers. And one of the brothers was very faithful to his father and the business. The other brother was a big partier and liked to hang out with the Paris Hiltons of biblical times. Anyway, that brother took his inheritance early and left town for Vegas. Then when he ran out of money, he went back to the farm and said, "Daddy! Give me some money." And then the daddy said, "Sure son, I'm so happy to see you. Let's kill our fattest calf to celebrate your return."

And then the faithful son said, "What is up with that? I've been kissing your backside for the last 10 years and you've never thrown me so much as a strip of bacon! And now this loser shows up and you're throwing barbecues?"

Then the daddy says something about I don't know what. I never got the moral of that story. I kind of agreed with the faithful son at the time. But now, I'm beginning to think I'm the other brother. The one that spent the inheritance. So I've changed my opinion of which brother was right. A calf shall be killed. And my momma seems to agree.

She kills an entire calf about every month. Do you know how big a calf is? It could probably feed an elementary school for three months. I know she doesn't eat it all because I know she gives our neighbor a couple of packs of rump roast to mow our yard. And I've seen my momma leave our house several times with big bags of meat. So I think she's decided to use beef as currency. I think the whole situation is adorable. And so I want to fix up my momma's back yard so I can sit there with her and talk to her and listen to what makes her tick. I have a good feeling that it's T-Bones.