The Loss of Something 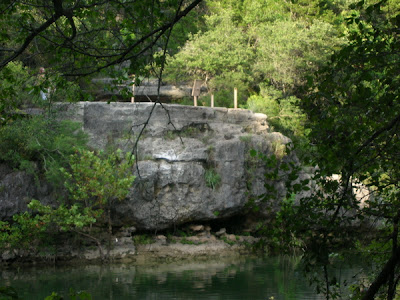 I was always taught that to lose something was a bad thing. But what if the search for the lost item reveals something much more valuable? Is the loss still a bad thing?

I was presented with this question, when I lost a pair of three day old sunglasses. It began with a trip to my now number one favorite swimming hole in Austin. It’s usually a dried up pile of rocks but due to an enormous amount of rain, the pile of rocks has turned into beautiful, flowing river.

My first time to the river to swim was with my sister, Kay who was visiting me. People of all ages sunbathed on the banks of the rivers, or rode inner tubes up and down or just let the rushing water carry their bodies down the stream.

I decided to join in the fun, and let a gushing stream of water pull me down the river. It was a bit scary at first but also somewhat of an adrenaline rush. That is until I lost my sunglasses.

Normally, I would have considered them a casualty of an afternoon of summer fun. But they were only three days old and had been purchased to replace another pair. So I jumped on the banks of the river and then ran down to an area where the water leveled out.

Across the river, a little further down was a small cliff. Perfect, I thought. I could climb to the top of the cliff and look for my sunglasses which I hoped would be floating somewhere around in the water.

On top of the cliff sat a group of teenagers. I wondered if they were also looking for sunglasses or maybe a missing shoe. I was wrong on both accounts because the teenagers were simply waiting for their turn to jump off of the cliff into the water below.

I looked down at the water and my heart sped up. I have a terrible fear of falling and I began to wonder why I had climbed up there in the first place. I didn’t see my sunglasses and so decided to climb back down to the ground below.

But then this one kid who couldn’t have been more than fifteen stood on the edge of the cliff with his back facing the water.

At first I thought, Wow. I want to see this. But then the adult in me said I should do something to stop this drunk kid from killing himself. But before I could even think about what to say without sounding like an un-cool old guy, the kid jumped and did exactly what he said he was going to do. He cut a slow back flip and managed to live.

So I start thinking that if a drunk fifteen year old boy could cut a slow back flip from this cliff and not kill himself, then there was no reason that I, a 37 year old sober man, couldn’t at least jump feet first without killing myself. But I was so scared. I wonder what would happen if I slipped or if it wasn’t deep enough. I had a slight ear infection and wondered if the jump would irritate it. I came up with tons of reasons why I shouldn’t jump. But finally decided that they weren’t good enough and wondered what it was that I was really scared of. I didn’t know and decided that I should find out.

And so I took a deep breath and then took a few steps forward and jumped. Every muscle in my body tightened. I could feel my heart beating so fast that I thought it might pop out of my chest. And suddenly my whole body became cold. Then I hit the water. And that’s when I realized what I had done. I had conquered a fear. And in a weird way it made me realize that if I could jump from the cliff that I could handle all of the things that life will hand me. And I learned all of this while searching for a pair of three day old sunglasses.
Posted by Jacques at 8:54 AM 3 comments: 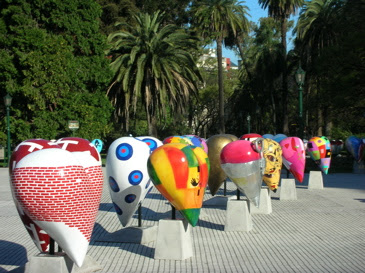 Right now I’m in my apartment eating some empanadas from a place called, Solo Empanadas. They are so good. They should open a chain in the US. They’d make millions.

This afternoon I went for a run and found a running trail through a bird sanctuary. The trail goes along this huge river for a while. It’s really beautiful. There are parrots and these big lizards about the size of a Chihuahua everywhere. It’s kind of freaky when one runs in front of you. But they don’t look like they bite so I should be okay.

There were a bunch of people playing soccer in the fields before the running trail. Every where there is a patch of grass in the city, there are people playing soccer. I think I’ve only played the game once at summer camp for about five minutes. I’m a little scared to tell people here that I don’t really watch soccer. I think that would be a sin here.

I also saw a bunch of heart statues in this plaza. I guess it's part of an outdoor art exposition. I think it's really cool. They did the same things with cows in Chicago and New York and with Pelicans in Lafayette.

I went to the grocery store this morning. I bought what I thought was suntan lotion but when I rubbed it on my skin, I realized that it was liquid soap. I guess I need to learn Spanish. When I first lived in Paris, I did the same thing with cat food and pate'. But if all I have to worry about in life is bringing home soap instead of suntan lotion or cat food instead of pate', then I guess I’m doing okay.
Posted by Jacques at 4:41 PM No comments: