The Bond of Asphalt and Leadership 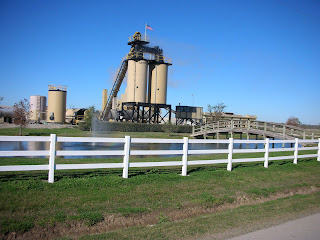 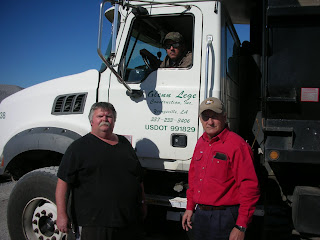 Glenn Lege was a farmer for many years before he purchased a bulldozer and began doing land work in his spare time. After a while, the number of land work opportunities increased and he expanded his equipment inventory. Then in 1992, after several years of growing, he opened Glenn Lege Construction Incorporated.

“The people I have behind me is the reason I was able to grow,” says Lege. “My employees are determined to succeed, and I wouldn’t trade them for anything.”

Glenn Lege Construction produces and lays asphalt for everything from driveways to interstates. Their customers are local and state government departments, developers and private citizens.

“The best part of this industry is when a customer calls and tells us that we did a good job,“ says Lege. “The most challenging part is managing all of the logistics and regulations.”

When Lege first opened his company, he relied on other sources for the asphalt he was using on projects. In 2006, he realized a need to have more control, and so he built his own asphalt plant on the outskirts of Abbeville on Sand Pit Road.

“There was a lot of hard work and financial risks involved in building the plant,” says Lege. “But after we made our first batch of asphalt, it felt like I’d been rewarded.”

Additional services of Glenn Lege Construction include developing land by clearing it of trees and shrubs, digging underground drainage, and building sidewalks, curbs and roads. The company also rents equipment such as bulldozers, excavators, graters, tractors, and dumps trucks, and sells dirt, sand and limestone by truckload or for entire jobs.

I recently visited Lege at the asphalt plant. A white ranch-style fence frames the front of the property, and right on the other side is a large pond with a bridge crossing over.

“I didn’t want the plant to be an eyesore,” said Lege. “We try to keep the area near the road mowed and free of trash.”

One of Lege’s associates, Brandon Neuville, gave me a short explanation and history of asphalt. He said the product we most often refer to as, “asphalt,” is a mixture of mineral aggregates like limestone, sandstone and granite, and a sticky, black petroleum based liquid which is also called, “asphalt.”

“Asphalt was used in ancient Egypt,” said Neuville. “They used it to make foot paths.”

According to Neuville, the composition of asphalt depends on its future use. For example, the mixture of minerals for a driveway would not be the same for an interstate.

Neuville and Lege gave me a tour of the plant, most of which is located outside. In addition to machinery and cylinder shaped storage facilities, there were pyramid-sized piles of aggregates.

On average, the plant produces 250 tons of asphalt per year. I was able to watch it being made from start to finish, which takes approximately three minutes. Although there is a tremendous amount of precision involved in the production, the easiest way for me to explain it is to compare it to making Christmas candy.

You start with a cup each of pecans and walnuts or limestone, sandstone and granite. Heat the mixture in an opened flame oven at about three hundred degrees. Then mix in something syrupy like caramel or liquid asphalt, and voila, you have ready to lay asphalt or a batch of holiday snicker doodles.

One part of the plant that is located inside is the control tower. Associates in this room have a good view of the surrounding area and are responsible for monitoring the production process.

I got to go up in the tower and sit in front of the control panel, which was a little larger than a writing desk and filled with brightly colored buttons. I’m like a kid on an elevator when it comes to buttons and it was killing me to not be able to push every last one of them. An associate, Buddy Cruse let me scratch my itch by pushing a yellow one. I’m not sure what it did, but I’d like to think it was something really cool. 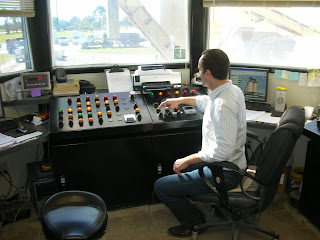 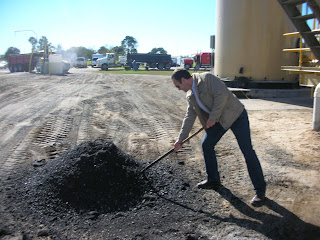 I was also able to ride on a bulldozer with Casey Lege while he moved large loads of aggregate to the asphalt-mixing bowl. He told me that he wasn’t related to Glenn Lege, but that he loved his job and working for the company.

“You have to surround yourself with good and knowledgeable people who have determination and heart,” said Lege. “I’ve learned the most about this industry from the people who work for me.”

In less than two hours, the employees at Glenn Lege Construction educated me on the definition of aggregate, and the in-and-outs of the production process for ready to lay asphalt. Lege was right about the value and importance of surrounding yourself with knowledgeable and hardworking people. But what was even more apparent was that Lege’s pride and leadership was the liquid asphalt that bonded his team of aggregates together to produce a ready to work attitude that can be used everywhere from driveways to interstates.

For more information on the products and services of Glenn Lege Construction Incorporated, call 337-893-7398.
Posted by Jacques at 3:49 PM