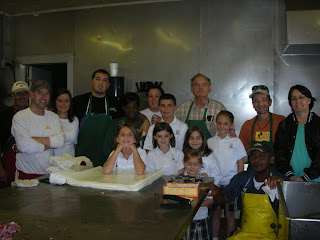 I was about eight years old the first time I realized how the cows in our back yard transformed into the best hamburgers in the world. My dad and I drove to a pasture of cattle and met a man driving a tow truck and carrying a rifle. I remember my dad pointing at a calf and a series of events that made me lose consciousness. I woke up at sixteen years old with a face full of pimples and a fear of tow trucks.

The process has changed since then, and is a lot more streamlined. I learned this first hand last week, when I took an in-depth tour of Herbert’s Meat Market and Slaughter House just outside of Abbeville.

Clement Hebert opened the market in 1955. He has since passed, but his business and legacy lives on thanks to the many generations of his family who followed in his footsteps.

“My great grandpa started his business by killing and processing a calf and bringing it into town to sell it,” says Blake Weaver. “I’ve been working here ever since I was a kid.”

Herbert passed the business down to his daughter, Marjorie Luquette and her family. Her husband, Albert Luquette Jr., and their three children, Shannon Luquette, Joetta Weaver, and Donna Faul are now the owners, and remain actively involved in the business.

“My most memorable times here were with my late wife, Marjorie.” says Albert Luquette Jr. “The part I enjoy the most about working here is being able to speak Cajun French to a lot of the customers,”

“Next year we’re planning on building a new facility just next door,” says Blake Weaver. “We’re going to have a smoke house, expanded deli and tables for customers.”

Hebert’s also processes meat from animals that customers bring in. Most of their business is from calves and pigs, but they also work with deer, wild hogs, elk, buffalo, sheep and goats.

According to Weaver, a customer will receive approximately 55% of the weight of the animal in meat. For example, a five hundred pound calf might yield 280 to 300 pounds in product. He says that calves from six to eight months in age and 300 to 500 pounds usually provide tender cuts.

“One of the hardest parts of this job is lifting an animal because they can weigh up to 700 pounds,” says Weaver. “To be in this business you have to be willing to work, and be good with the public.”

Across the street from Hebert’s, there used to be a horse race track named Cajun Downs. Many local jockeys like Randy Romero, Calvin Borel, Ricky Faul, and Kent Desormeaux raced there. The location was used in the 1978, movie, Casey’s Shadow, and might make a future appearance in a film about Randy Romero’s life.

When I visited Hebert’s Meat Market and Slaughter House, Weaver gave me a tour of the facility. He was very explicit in describing the different areas and what happens on a daily basis. I got an up close look at the pen where the animals are stored, and learned about their journey to becoming boudin in a rice cooker. 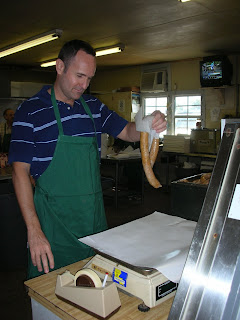 The retail area of the building has display cases filled with a variety of meat specialties ranging from stuffed beef tongue to pan sausage laced with veil of stomach. Behind the counter, employees cut, season and package products for the many hungry customers visiting the store.

“My grandpa Luquette told me that to be successful, you always have to put the customer first,” says Weaver. “We appreciate everyone’s business and hope to have it for at least another fifty-five years.”

What impressed me the most about my time at Hebert’s Meat Market and Slaughter House was the dedication. The family and employees were dedicated to working hard and putting out a superior product in an efficient manner. They worked together with precision like a finely tuned machine. One that was built by Clement Hebert and continues to improve through the generations of his loved ones.

Hebert’s Meat Market and Slaughter House is located at 7630 West LA Hwy 338. They are currently looking for a butcher/ meat cutter. If interested in applying or to learn more about the products and services of the market, call 337-893-5688.
Posted by Jacques at 9:29 AM