Gas Station for the Sky 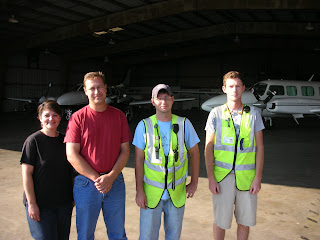 Mike Mouton was in college when he began a part time job washing aircrafts at the Abbeville Chris Crusta Memorial Airport. He eventually acquired full time status, and has been working in the aviation industry for the past fifteen years.

“My excitement comes from the operations of the airport,” says Mouton. “It’s a community here. We all work with each other.”

Mouton is the manager of Vector Aviation, which is owned by Joey LeRouge. The fixed base operation sells quality fuel to individual aircraft owners and helicopter companies. Additional services include guidance with travel arrangements, the storage of aircrafts, parking spaces and a facility for travelers and pilots to coordinate trips.

“I guess you can say we’re a gas station for the sky,” says Mouton. “But our main purpose is to provide great customer service.”

Vector Aviation sells aviation gasoline, and Jet A fuel, which is aviation grade kerosene designed for use in gas-turbine engines. Although there are exceptions, the aviation gasoline is mostly used in fixed winged aircrafts and the Jet A is used in helicopters.

“It’s very important to use the right fuel in the right engine,” says Mouton. “You can tell them apart by their color. The Jet A fuel is clear, but the aviation gasoline is blue.”

Mouton’s responsibilities include having extensive knowledge of FAA regulations, and negotiating and managing the logistics of trips with helicopter companies and aircraft owners. Before working at the airport, Mouton was in the United States Marine Corp where he was an Aviation Ordnance Marine. His duties included mechanical troubleshooting on helicopter weapon systems.

I visited Mouton at the airport last week to find out more about his job at Vector Aviation. It was a foggy morning so the runway was quiet as pilots and travelers waited patiently for a clear sky.

“I tried to arrange a helicopter ride for you but it’s too foggy,” said Mouton. “But I can let you fuel one up.”

Although the technique is very similar to tanking up a car, (insert nozzle into fuel tank, squeeze handle, wait patiently) I was pretty excited to be fueling up a copter. It made me feel like a military pilot or an international crime-fighting playboy with a trust fund. 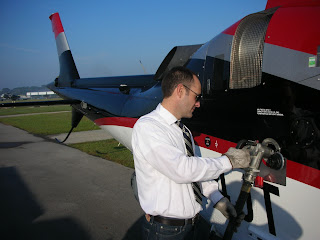 Mouton gave me a tour of the airport via a golf cart. We visited the heliport facility as well as the hangar where the fixed winged aircrafts are stored.

“Most people keep their airplanes inside a hangar,” says Mouton. “Aircrafts are very fragile and the outdoor elements can be damaging.”

As the morning progressed, the fog lifted and fixed winged aircrafts and helicopters began taking off. Mouton drove the golf cart to the side of the runway and we watched a single engine plane lift up into the clear sky above us.

“This is fun for me,” said Mouton. “I can’t say enough good things about working at the airport.”