Golden Fields of Grain and Tradition 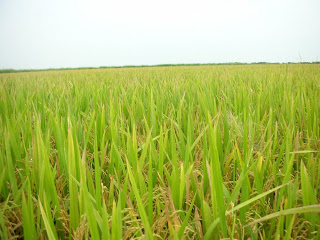 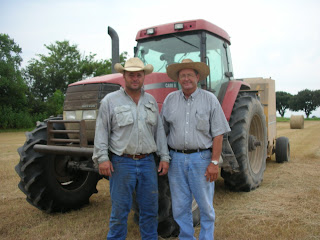 A gardener finds inspiration from many different sources. It might be a desire for fresh flowers, fruits and vegetables or the love of creating life from soil and seeds. But for some, a garden is inspired by tradition.

“My father, grandfather and great grandfather were all farmers,” says gardener/farmer Patrick Hebert. “Growing food is a part of my heritage.”

In addition to crawfishing and raising cattle, Hebert also farms rice. This year he is growing approximately 1,000 acres in fields spread throughout Vermilion Parish.

“I used to farm about 1,500 acres,” says Hebert. “But because the recent hurricanes flooded the land with salt water, I had to cut back.”

According to Hebert, rice is usually planted around the end of April, or beginning of May. It can be done by a crop duster that drops seeds in a flooded field, or by a machine that drills seeds into the ground.

“They both have their advantages and disadvantages,” says Hebert. “For example, no till drill planting conserves soil and prevents water pollution.”

After the rice is planted, Hebert cares for his garden by fertilizing, and maintaining proper water levels. He also routinely monitors the crop to control the invasion of weeds, like red or black rice, and insects like army worms, root maggots and stink bugs.

“The growing cycle, from planting to harvest is about sixteen weeks,” says Hebert. “All of the grain has to be gold before the rice is ready to cut.”

Hebert says the biggest challenge of farming is being at the mercy of the weather and the market price of rice. A drought or storm can dramatically affect the profitability of a crop.

“The price of rice depends on what the rest of the world is producing,” says Hebert. “We don’t know what we’re going to get for our crop until the day we sell it.”

Hebert is on the Vermilion Soil and Water Conservation District. It’s made up of five supervisors on the local level who focus on soil and water conservation, and preventing air pollution.

“We promote farming practices that have less of a negative impact on the environment,” says Hebert. “I’m in the process of replacing our farm’s old diesel pumps to electric. They’re much more efficient and don’t pollute the air and water.”
OLD DIESEL PUMP ABOUT TO BE REPLACED BY ELECTRIC ONE 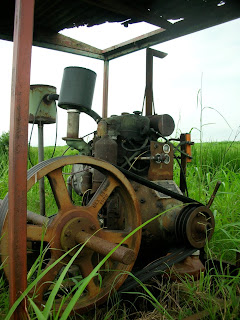 When I visited Hebert, we jumped in his pick-up truck and he drove me along some of his rice fields. To the left were golden fields of grain, and to the right were canals used to water them.

“Your field always needs a water source,” said Hebert. “It’s cheaper to pump it from a canal than from a ground well, but during droughts you run the risk of salt water intrusion.”

Hebert harvested a few acres of his rice the day before my visit, but had to wait a little longer for the rest of his crop to ripen. At least that’s what he told me, but I highly suspect he just said that because he was afraid I’d ask to drive a combine.

During the tour, we visited Hebert’s son, David who was bailing hay. He currently works with his father, and is continuing the tradition of farming in his family. 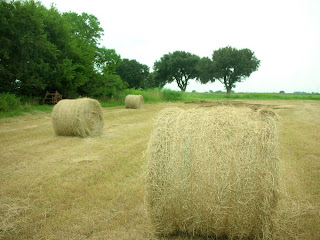 “I love being outside and working with my dad and grandpa,” said the younger Hebert. “There’s always something different happening on a farm, which is great because I like having flexible days.” 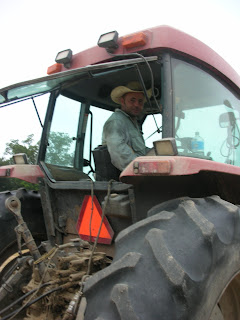 Although I grew up on a farm, I learned a tremendous amount from the Heberts. They enlightened me on new technology as well as the challenges a modern day farmer faces.

But most importantly, I learned that there are different types of gardens. They are all used to grow something, but need not be limited to only fruits, vegetables and flowers. Whatever is produced is up to the gardener, who may choose to use a plot of land to carry on a family tradition and create golden fields of pride, love and grain.
STRANGE BY BEAUTIFUL WILD FLOWER 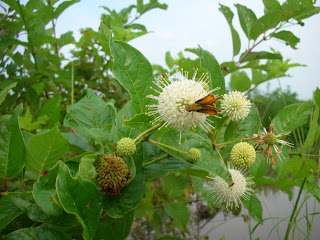 Great story Jacques, David (my David) works for the Heberts and he said to tell you don't worry, they don't let him drive the combine either haha.