Strength From a Dad's Sunrise 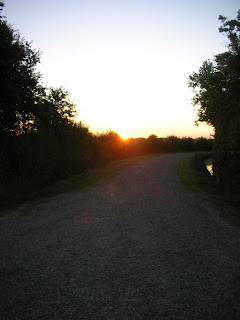 For the past year, I’ve been waking before the sun rises. Sometimes I take early eastward walks to see its rays of light just as they begin warming the sky. Other times I sit in my room in darkness and wait until beams of energy slowly illuminate the walls like several high-powered flashlights being turned on with dimmer switches.

Sunrise has become my favorite time of day, but it’s not always easy to wake before the rooster crows. Sometimes there is a late night, insomnia or an interruption by life. So where do we get the motivation to wake up early enough to watch Passe Partout? Where do we get the strength?

I grew up on a farm in Cow Island, where waking up before the sun rises is as much a part of life as shovels, tractors and animal manure on the bottom of boots. My dad, Andrew Couvillon, also grew up on a farm and loved to wake up early. Sometimes he’d get up at 3:00 a.m. or would be awake before I’d even gone to bed.

In my early teenage years, my dad would enthusiastically ask me to join him in his ritual of waking early by walking into my room, turning on the lights and leaning over my bed so our faces were only inches apart. Then he’d loudly sing a song he’d made up about crawfishing.

Good Morning! Good Morning!
The sun is shining so you can stop wishing.
It’s time to wake up and go crawfishing!.

My eyes would pop open and see my dad’s smiling face inches away from mine. Still half asleep and thinking I was being attacked by a giant Cajun, I’d scream until I’d wake myself up.

“It’s still dark outside,” I’d tell him. “Even the crawfish are sleeping.”

Despite my best arguments, my dad never changed his mind and I’d find myself bouncing around the cab of his truck as it headed to the crawfish pond out in the middle of the Louisiana wilderness. My eyes would be closed the entire way, as my head rested on a home made pillow constructed from a rubber boot covered by a pair of gloves and an emergency roll of toilet paper.

Sometimes the sun would rise on the way to the crawfish pond, but other times we’d have to park the truck and wait for the earth’s headlight to flicker on. I’d keep my eyes shut tight until my dad would tell me to start working. Then I’d become more concerned with the hours ahead of me instead of the lighting of a brand new day.

On one of the mornings I worked on this column, I found the strength to get up early enough to drive out to the crawfish pond. I felt lost amongst the darkness of the curvy gravel roads covered by arches of trees. Herons and egrets flew in front of my car as if guiding me into another world or time.

When I reached our property, I parked and walked to the crawfish pond just in time to see the sky light up in shades of blue and pink. I spoke out loud to my dad and apologized for never opening my eyes before to see what he was trying to show me. He answered me with a memory of the two of us from my childhood.

My dad was sitting on the porch of a camp that used to stand a few hundred feet from the crawfish pond. He was barefoot and wearing a white t-shirt and boxer shorts. I was barefoot as well, but shirtless and holding a tree branch with an attached string over the water of a nearby canal.

“I wonder what the poor people are doing?” My dad asked and smiled.

We both laughed, and then communicated without words. I told him that I loved him but was a confused child who wasn’t sure which way was which. He answered back that he loved me as well, and not to worry because he would teach me.

My dad taught me to praise every morning I wake up because I’ve been blessed with life. He taught me that a family has to work together to overcome obstacles and to survive. He taught me that through the sweat of a brow and an early sunrise there is strength.
Posted by Jacques at 4:37 AM

Wonderful story Jacques!! Absolutely one of my favorites.