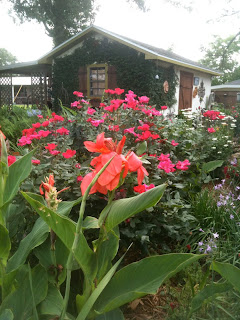 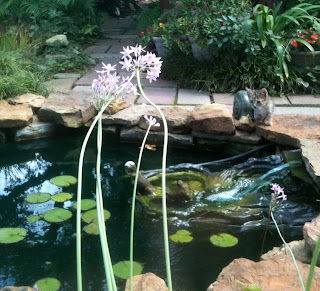 Just outside of Kaplan is a Swiss themed cottage surrounded by flowers, lily padded goldfish ponds, and thirteen multi-colored kittens playing a game of hide and seek. During the daylight hours a lion fountain, stone soldiers, and a straw woven fence crowned with curly willow arches protect the garden. But at night, while all the inhabitants of the tranquil beauty rest, a hard-shelled, pointy nosed, un-invited guest wreaks havoc.

“Armadillos are my number one worst enemy,” says garden owner, Greg Meaux. “I tried to catch one with a gentle-catch trap, but the kittens kept getting caught.” 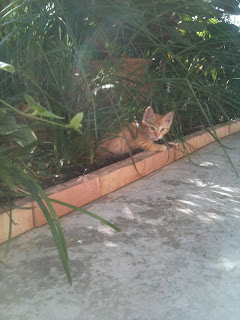 Meaux’s garden is 102’ by 180’ in size. Invited guests can meander through the grounds via stone and gravel paths lined with nature’s royalty like Society Garlic, Twelve Apostles and Lily of the Nile. The songs of birds and fountains are heard throughout the beds of daises, roses and black-stemmed elephant ears.

“I grew up on a farm,” says Meaux. “I love watching things grow from a seed into fruit or a bloom.”

Ivy climbs two sides of the Swiss themed cottage. It was once a regular tool shed, but Meaux transformed it with small personal touches like wooden shutters, a copper colored sun ornament and a painting of lavender wisteria climbing up a brick wall of a villa. 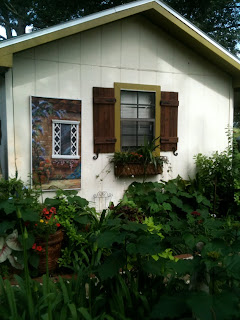 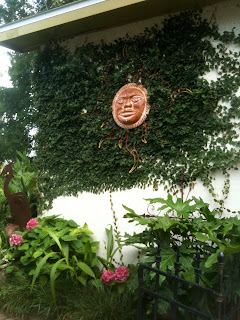 “I’m a very visual person,” says Meaux. “I want my garden to look like a photograph or painting.”

Meaux is a supervisor with the Vermilion Parish School Board. He also teaches art classes and is a licensed florist. He grows plants and trees like leather ferns and curly willows to use in many of his arrangements.

“My favorite time of year in the garden is the spring,” says Meaux. “The wisteria, azaleas and bridal wreath are in bloom at the same time, and the colors are so vibrant.”

According to Meaux, the hardest part of having a garden is maintenance. In addition to fighting off armadillos, he also spends a lot of time picking up pine needles (His second worst enemy). But he says that the best part of gardening is the therapeutic qualities it provides.

“Being outside in nature gives me spiritual inspiration,” says Meaux. “Everybody needs a hobby. We all need something to love.” 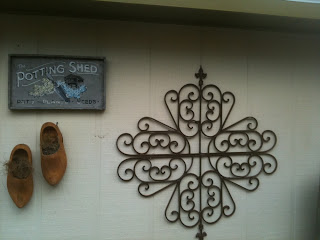 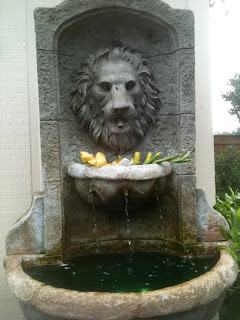 Meaux’s advice to other gardeners is to be sure that the plants they purchase are tolerant of growing conditions. He also suggests defining your garden with a barrier or fence.

“If you’re working with an area that is too large, you’ll feel defeated before you even begin,” says Meaux. “You should also make sure that everything is easy to water.” 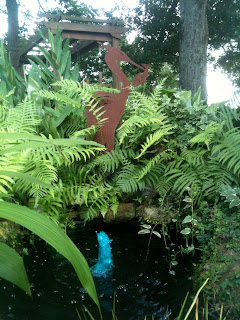 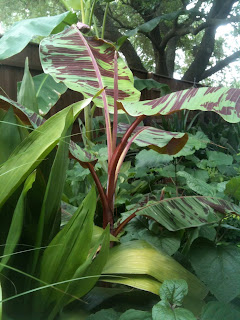 When I went to visit Meaux’s garden, I spent most of my time trying to photograph the best view of the Swiss themed cottage. Almost every angle provided an interesting feature.

“Take all the pictures you want of the front and sides of the shed,” said Meaux. “But don’t take any behind it.”

Since I have the maturity of a second grader, I suddenly wanted to go behind the shed more than ever. I fantasized about what could be back there including a fence made of armadillo heads or a plant that produced kittens.

“That’s my plant hospital,” said Meaux. “I bring plants back to life there.”

I interviewed Meaux in a back room of his home, which overlooked his garden. The wall was filled with windows that looked like flat screen televisions. In one was a view of kittens chasing each other around a bubbling blue goldfish pond. Through another was the copper-colored sun smiling from the ivy-covered walls of the Swiss cottage.

“I like to create little scenes or stories in every setting,” said Meaux. “I’m constantly moving things around to make it all pleasing to the eye.”

“Pleasing to the eye,” is an understatement of the beauty and art that Meaux created in his garden. With so many wonderful stories being told through the flowers, fountains and kittens, it’s no wonder that the armadillos keep breaking in.