Love at a Distance 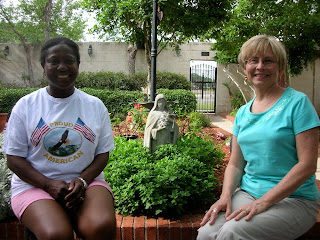 There’s nothing quite like eating fresh fruits and vegetables you grow yourself, cutting flowers from boxes hanging from your kitchen window or sitting under the shade of a tree you planted to celebrate a new home, or birth or just because you wanted to block out that nosy neighbor’s view of your driveway.

I believe there is a lot to learn from the earth’s gardens and the people who create and care for them. So for the next few months, I’ll explore different yards and outdoor areas of Vermilion Parish. We’ll hopefully learn gardening tips, gain insight on the world and enjoy some nice moments with the landscape surrounding us.

Our first stop is a hidden garden behind St. Theresa Church in Abbeville. Although the red bricked-in courtyard that leads to the Perpetual Adoration Chapel isn’t a secret, both are only visible to the adorers of a Eucharistic devotion.

“St. Theresa began its Perpetual Adoration Chapel in 2005,” says Becky Moss. “Maxine Scalisi and I coordinate the Eucharistic devotion. We try to have at least two adorers in the chapel at all times.”

According to Moss, about fifty or more people pass through the courtyard garden each day. One of these adorers is Mary Castille, who designs and maintains the space.

“I was walking through the courtyard one day and it felt so peaceful,” says Castille. “I asked Father for permission to start taking care of the garden because I wanted to give back to my church community. Two of the parishioners, Amy and Bill help out a lot and several others donate plants.”

Although Castille isn’t sure of the exact size of the courtyard, we both estimated it to be about the same area as half of a basketball court. The garden contains plants like Christmas Cactus, Easter Lilies, Angel Face Roses and Hearts of Jesus. English Ivy climbs a brick wall behind a large statue of St. Joseph. Holly and Japanese Magnolia trees decorated with wind chimes and Boston ferns provide shady seating areas for reflection. 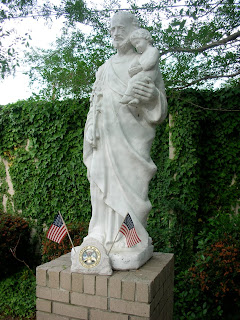 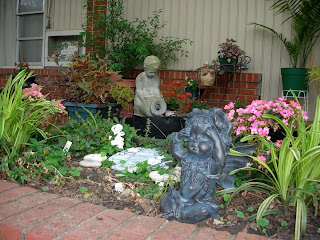 “Some people come into the garden with a lot of problems,” says Castille. “The smell and beauty can wake them up and make them feel better.”

Small statues and plaques with inspirational quotes are sprinkled throughout the courtyard to provide hope and smiles. There is even a goldfish pond with a fountain that fills the air with the calming sound of water. 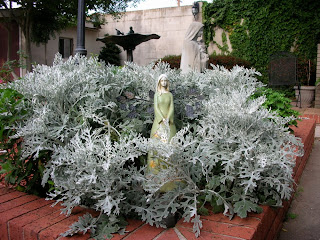 “You can’t give everyone flowers,” says Castille. “But you can plant a garden and give people love from a distance.”

According to Castille, the hardest part of taking care of the garden is during the fall when all of the leaves from the trees drop into the courtyard. Her favorite statue in the garden is one of an angel holding a bird up into the sky.

“She’s releasing love to all who are having a bad day,” says Castille. “This garden is a healing place and brings me peace, joy and happiness.”

During my interview with Castille, some of the adorers from the chapel came into the courtyard. But they didn’t walk straight to the wrought iron gate that would bring them back outside. Instead, they walked around the garden asking questions about certain flowers or taking moments to read the inspirational plaques. 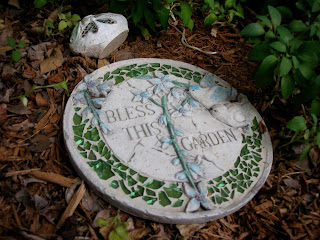 I don’t know the adorers’ names or anything else about their lives. But I can tell you that they benefited from the few moments they spent in the garden, Be it a smile as they leaned over and smelled Confederate Jasmine, or the gentle touch of their hands against the leaves of Hearts of Jesus, they all felt love from a distance.

“When you’re planting a garden, put your heart into it,” says Castille. “Your heart won’t lead you wrong.”

To become an adorer, contact the office at St. Theresa Church.
Posted by Jacques at 1:41 PM