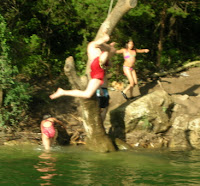 About a twenty-five minute drive from Austin and a thirty minute hike through the forest is a beautiful river with a rope swing. Bohemian liberals and teenagers rest on the large flat rocks in the river. They seem as relaxed as if they had been born there and that they are safe from all of the evils of the world.

On a recent, warm summer day, two of my friends and I headed to the river with the rope swing. One of my friends described the scene as a Country Time Lemonade commercial. The other as the beginning scene of a summer camp horror movie before the killer finds its victims.

We set our towels down on a rock directly across from the rope swing. I jumped into the water immediately because I wanted to feel like I was part of the beauty of the river and the people surrounding it.

And then I sat down on my towel to relax and that’s when the rope swing captured my full attention. I became fascinated with watching the people swing from it. Some of them took it on as an Olympic sport. They cut flips and dove. They had grace and style as they dismounted from the rope into the water.

At one point, my friends asked me if I wanted to go on the rope swing. I told them no and then I sat and watched them. I thought the water might be too cold and I was too comfortable and I came up with a ton of other excuses why I couldn’t go.

When we left, I thought that I’d had a great day and was lucky to experience the river. But there was also something following me as I hiked out of the forest and I didn’t know what it was. I was beginning to wonder if my friend was right and I was in a horror movie and the killer was on my trail. Ironically, I was more accurate than I realized.

This came to me a couple of days later when I woke up at 5:30 a.m. covered in sweat. My entire body was tense and stiff. I decided to go for a run to clear my head. And while I was running, I realized what followed me out of that forest. It was fear.

I’m thirty-seven years old and throughout my life I’ve quit several jobs without having a new one. I’ve moved to several cities throughout the US and other countries without knowing the language or a single person. And yet, I was scared of a rope swing.

I wasn’t scared that I would be physically hurt, but I was scared of what the people watching me would think. I was afraid that I wouldn’t look as graceful as many of them had. It’s the same fear I encounter whenever I dance or throw a ball or ride a horse. I have flashbacks to all of the times I was teased for my clumsiness.

I’ve let fear hold me back from doing several things in my life. And everyday I try to conquer this fear because I don’t ever want to look back and say, “I wish I had done that.”

As long as I continue to carry that fear around, it will continue to kill my spirit a little more each day like a cancerous tumor or like the murderer in a horror movie. I don’t know that I will ever fully conquer my fears, but I know that I will take a first step towards doing so. That being said, I promise to you and myself that before summer is over, I will go back to that river and I will swing from that rope. And I will have a great time doing it. Even if people laugh or point, I will know that I did no harm to the world and I am only curing myself.
Posted by Jacques at 1:27 PM

Jacques, go for it. You are full of life and energy! It's inspiring that you have left your comfort zone and had so many awesome experiences. No one is perfect...remember that when you have doubts.