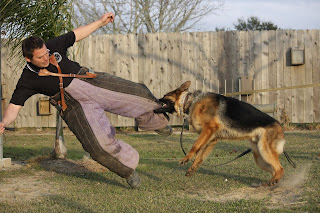 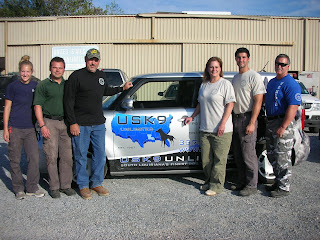 Roger Abshire was in fourth grade when he won a first place 4-H title in dog obedience. This sparked his interests in working with animals, and career and life aspirations for something much larger.

“I used to read every book I could find on dog training,” says Abshire. “I would knock on people’s doors and ask them if I could train their dogs. I’d read some more then apply the techniques. Every time I learned something new, I found another dog to train.”

Abshire is the owner and president of US K9 Unlimited located in Kaplan. The academy trains police dogs for personal protection, security patrol, arson investigation, and narcotics and explosives detection. Their customers are law enforcement agencies, corporate security, interdiction enterprises and the private sector.

“There is a national standard that this industry abides by,” says Abshire. “There are a lot of mandatory classes and licenses needed to run this business.”

In addition to training dogs and handlers at the local level, Abshire is a canine consultant for the government and law enforcement agencies worldwide. He is a regular contributor to 008 Magazine, offering expert advice on dog behavior problems. He has received specialized education throughout the world, including European police service canine training from both the Royal Dutch and German Police.

“It’s a joy for me to work with dogs,” says Abshire. “My most memorable moment in this career was when I was able to turn something I loved into my profession.”

Abshire routinely flies to Europe to purchase dogs he feels have the qualities needed to go through his training program. Although he has trained many different breeds, most of the dogs he selects are German Shepherds and Belgium Malinois.

“The dogs are usually between one and three years old,” says Abshire. “Before one, a dog doesn’t have the focus needed to be trained for a team. It’s no harder to teach an old dog new tricks, but it’s not a great investment.”

“The biggest mistake people make with their dogs is trying to communicate with them in human terms,” says Abshire. “Dogs don’t learn like we do. They don’t have the same reasoning.”

I recently visited Abshire at US K9 Unlimited. The facility is approximately one and a half acres and is divided into different areas such as training stations, and an abandoned house used to create scenarios. It helps the dog being trained become accustomed to running through houses to tract someone, or to search for explosives and narcotics.

“We try to train the dogs in as many scenarios as possible,” says Abshire. “The community has been very helpful by offering up their property. We’re always looking for different locations to train.”

Abshire gave me a tour of his academy, and demonstrated some of his training devices. He invented many of them himself, and also has proprietor techniques deemed trade secrets by the U.S. Government.

When I asked Abshire if he’d ever been bitten, he smiled and responded, “Through my career, I’ve been bitten so many times that when I drink water, I leak.”

Abshire said this to me just before I was supposed to have a picture taken of a dog attacking me. Although he offered me a sleeve with a metal pipe inside to wear on my arm, I was more interested in a baseball cup to protect something else.

It was pretty intimidating to have a man shout attack words and then release a trained German Shepherd to bite me. My impulse was to run, but there was another man with a camera only a few feet away, and I didn’t want any pictures of me jumping over a fence to show up on Facebook.

So I braced my legs as the police dog latched onto my arm. We stared at each other as the man with the camera told us to hold still for the picture. It was probably the longest ten seconds of my life, but when the German Shepherd rested his claws on my knee, I knew it was just as uncomfortable for him. 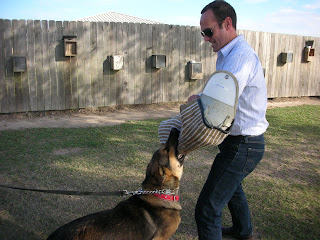 Aside from a few tense moments, I thoroughly enjoyed my time at US K9 Unlimited. Not only because Abshire gave me free advice on training my own dogs, but because of his story. His specialized training and extraordinary experiences are very impressive, but it’s his love and passion for his career that makes him so dog gone good. 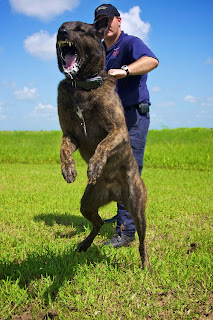 TOBY WALKER
Posted by Jacques at 3:54 AM