True Calling Found Under the Hood of Truck 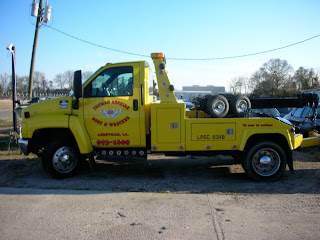 I’ve had many different jobs ranging from selling ties to working at a rice mill to serving Crystal Light and lemon meringue pie at the lunch counter at Woolworth’s. At the start of each new one, I’d hope that I’d found my true calling in life, but they’d all end with disappointment. It wasn’t until I was thirty years old that I realized I was meant to be a writer.

But some people, like Brady Abshire, find their true calling much earlier. Before he was even a teenager, he realized that he was meant to repair moving vehicles.

“My dad bought old cars from the 1930’s and we’d restore them together,” says the younger Abshire. “When I was twelve, my cousin and I repaired a 1978 Ford pick-up truck. It felt like a huge accomplishment, and made me interested in automobiles.”

Brady Abshire began his training at eight years old when he swept floors at his father’s business, Truman Abshire Body and Wrecker. He eventually moved on to painting bumpers on trucks, and worked his way up until he became the owner in 2003. 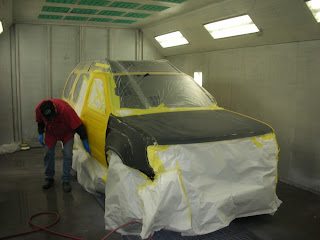 “We’ve towed vehicles from Texas to Florida,” says Abshire. “The best part of this job is seeing a smile on a customer’s face when they see the work we’ve done.”

All of Abshire’s auto body technicians are certified mechanics. They undergo routine ICAR training and are tested every five years by ASE, Automotive Service Excellence. Their technology includes computerized frame straightening equipment, and a computer and camera combo, which can identify the formula for any color paint.

“We continue to invest in the company,” says Abshire. “We stress education, safety and protecting the environment. We recycle as much as we can including anti-freeze and Freon.”

In the middle of my interview with Brady Abshire, I heard my name being called over a loud speaker. I ignored it at first because I thought I had misunderstood. But then the woman made the announcement louder and I was positive she was talking to me.

“Jacques. Come to the front and bring a shammy.”

At first I wondered if Abshire expected me to work in exchange for his interview. The only collision repair experience I had was with a dented fender on my car. I beat it out with a hammer and then put Band Aids over the chipped paint.

“Did I hear right?” I asked Abshire. “Did some woman just announce that I should go to the front with a shammy?”

“There’s another Jacques that works here,” Abshire said and laughed. “He’s an Hebert.”

Abshire gave me an extensive tour of the shop, where I learned the ins and outs of a collision repair center. I saw the guts of a door panel, and was even able to meet the other Jacques, who was working his way up to become a certified auto-body technician. 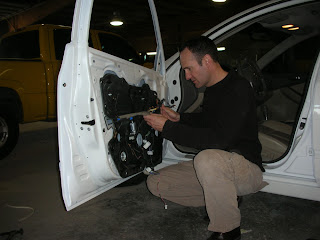 In the end, I was very impressed with the friendliness and qualifications of the people who work at Truman Abshire Body and Wrecker. The responsibility the company takes towards protecting the environment, and the importance its leader places on safety and education tells us more than it’s just a well run organization. It tells us that Brady Abshire found his true calling in life under the hood of that 1978 Ford pick-up truck. 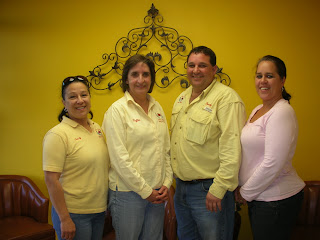