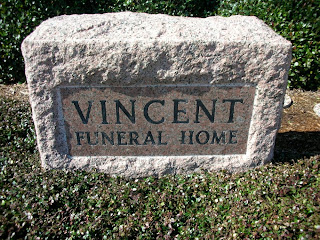 I always feel a little uneasy walking through the front door of a funeral home. The thought of someone’s death suffocates me like I’m wrapped in a heavy wool blanket. But usually after a few minutes, the darkly lit parlor filled with flowers, friends and family relaxes me, and I join in the celebration of a loved one’s journey to the next life.

A few weeks ago, I had a different experience when I accidentally walked into the back office of Vincent’s Funeral Home in Kaplan. Within a couple of seconds, I realized that I’d stepped into a new world. The lights were brighter, and people walked around quicker than in the parlor. Then all of a sudden, a familiar face appeared.

It was Jacques Vincent, the funeral director of Vincent Funeral Home. He was the other Jacques in Vermilion Parish; the cooler Jacques. Each time we cross paths, we greet each other the same, both amused at hearing ourselves say our own name to address someone else. 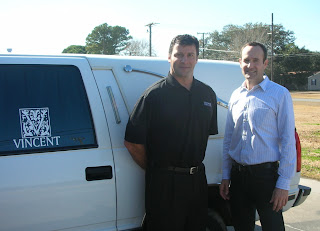 “How’s your family?” The other Jacques asked. “Is everything okay?”

His face tightened for a second, and I was reminded of where we were standing. So I quickly assured him that everyone was fine. His concern was genuine, and I knew that he had reached out to me as a friend. But my interest was also peaked by his profession as a funeral director.

“We have funeral homes in Kaplan, Abbeville and Gueydan,” Vincent said when I interviewed him a week later. “My dad, John Vincent, opened the first one about forty-five years ago. I started helping him with small jobs, like mowing the yard when I was a teenager.”

After graduating from high school, Vincent attended the Commonwealth College of Funeral Services in Texas, where he was class president and salutatorian. He completed fifteen months of classroom time, passed a board exam, and then had a yearlong internship. Upon completion, he became a licensed funeral director and embalmer. Then in 1990, Vincent joined his father’s business.

“The most important aspect of being a funeral director is supporting and guiding the families during the funeral process,” says Vincent. “Knowing that we’re helping them during this difficult time is what makes my job so gratifying.”

Vincent’s Funeral Home assists the family of the deceased with every aspect of the burial. They will submit the obituary to the newspaper, arrange police escorts, order flowers and provide help with any paper work including insurance benefits.

“As a funeral director, you not only deal with the deceased,” says Vincent. “You’re also helping the survivors, all who have different situations and needs.”

Vincent’s advice to anyone interested in becoming a funeral director is to work as an assistant first. He says that the situations of the business are very unique, and exposure beforehand will ensure a person is able to deal with the realities.

“The thing that had the most impact on me as a funeral director was when I lost my brother,” says Vincent. “It helped me realized what the families of the deceased are going through.”

The interview had changed. The man across the desk from me was no longer Vincent, the funeral director. He had become the other Jacques again; a friend, who because of his own loss, could now help others.

“I read your column,” he said and smiled. “Aren’t you supposed to do a job at the place you’re writing about? I have an idea.”

The smile on his face alarmed me, and I began to feel like the wool blanket had been wrapped around me again. What kind of job could I do in a funeral home that wouldn’t freak me out?

Vincent brought me to a brightly lit room and pointed at a white table with a hose sticking out of it. He suited me up in rubber gloves, a paper coat, and a plastic mask that made me feel like I was wearing a Return of the Jedi Halloween costume.

“It’s the embalming table,” he said handing me a large scrub brush. “Now clean it good or I’ll tell your boss at the paper you aren’t doing your job.” 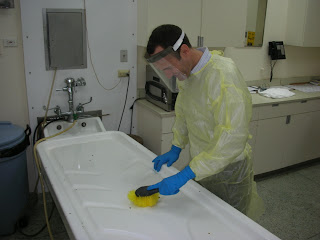 We spent the next few minutes laughing, and then headed to the lobby where Vincent’s
wife, Dawn was busy managing the day-to-day operations of a funeral home office. We all knew each other from high school, and I was reminded of weekends spent driving up and down Cushing Boulevard and hanging out at the Sonic.

Although I learned a lot from my interview with Vincent, it was the time I spent with the other Jacques and Dawn that gave me a real look outside the darkly lit parlors of the funeral home. Death is difficult for everyone, but life has to continue. It sure feels good to know that we have friends and family there to remind us and help us through it.

For more information on the services provided by Vincent Funeral Home, call 337-643-7276 or visit their Web site at www.vincentfuneralhome.net. Service info line: 337-225-5276 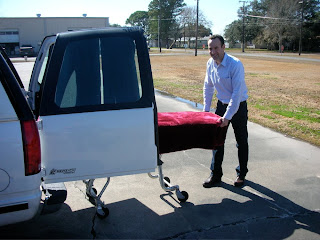