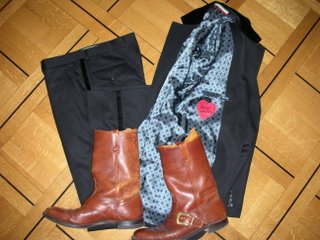 O.K. I’ve officially cracked. As I’m writing this, I’m listening to Elvis and am wearing cowboy boots and a tuxedo that I bought yesterday on a whim. I already have a tuxedo. Two other if you count the one I used to wear when I worked as a caterer. I wore that one three times (once to serve food to a high school band at the Copacabana and another time when I served Joan Rivers coffee cake) and the real one, twice. So why did I buy another one?

I guess it all started yesterday morning when I saw a Maroon Five video. One of the guys was wearing a black jacket with a white shirt and a black tie. It was nothing cutting edge, but I liked it. Being that I’m not working in an office, I don’t have the need to dress up and so I often find myself in the casual uniform of today’s youth- tennis shoes and jeans. (All right, I’m in my mid thirties so I guess using the word, “youth” to describe myself is stretching it, but you get the picture.)

So, why the tuxedo? Why not a pair of khakis and an oxford? I guess I’m just in a stage of my life where I want to be a little bit glamorous. Is that so crazy? To every now and then want to stand out amongst the millions of others that surround you? To feel special?

I'm not saying that I need a tuxedo to be glamorous. I grew up on a farm and I would never trade that for the world. I realized this last year when I was home and I had to borrow my brother’s diesel truck. I was wearing flip flops and it was hard to use the clutch with them, so I took them off. When I shifted the gears, the truck jerked, causing me to bounce around on the seat. The only radio station I could catch was a Cajun French one. As I drove down the street, barefoot, listening to French music and bouncing around on the seat, I forgot that the air conditioner didn’t work or that I was choking on the diesel fumes or that a spring from the seat was poking me in the butt. I felt different from my friends in . I felt, well, I guess in my own way, I felt glamorous. And I’m not going to lie, it felt great.

Is it really that horrible to want to be a little different? I’m not talking about making yourself suffer just to be different. I’m saying doing something that you enjoy, which happens to make you different. So what if I want to wear a tuxedo to a McDonalds. I love this tuxedo. It fits like a glove and if I get hit by a bus tomorrow (wait, maybe a bulldozer because that sounds more glamorous), I want to be buried in it. If that makes me crazy, if that makes me a freak, if that makes me a person with bad taste or a person who is trying too hard to stand out, then I guess I’m that person. But in the end, when I'm laying in that coffin (make it a water bed) in my tuxedo and cowboy boots, I’ll know that I’m really just a person who wants to be, a little bit glamorous.