My Name is Jacques Couvillon 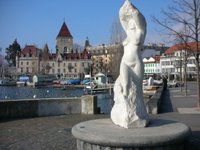 My name is Jacques Couvillon. My grandfather, who used to call me King Jackson, thought I was named after his brother Jack. My mom claims that I’m named after John F. Kennedy, who was popular at the time of my birth. Since I already have a brother named John, my mom named me Jacques. She said that people called our late President, Jack, but she didn’t really like that name. Since she wanted to please her father and honor our President, she went with Jacques, which she thought was French for Jack.

My mother made a common mistake in thinking that Jacques was French for Jack. It is French for John, and Jack is simply a nickname for John. I have gotten in several arguments with people about this. They claim that Jean is French for John which is not true. Jean is French for, well, Jean, which is pronounced and sometimes spelled Gene in English. When people disagree with me about my name, I refer them to the song, “Frere Jacques”, whose English translation, is entitled, “Brother John.”

This isn’t really about my name. Although those two paragraphs did give pretty good examples of people not really knowing what’s going on, even when they’re 100% sure about it. I’m not saying that I know everything that’s going on. I don’t, and that’s what this is about; me trying to figure out what’s going on in my head and the world that surrounds it.

So I guess I should start from the beginning and where I am now. I was born on a farm to the parents of Andrew and Julia Couvillon, a farmer and school teacher respectively. I am the youngest of eight children. Two sisters are school teachers, one brother a Sheriff, one a business man, another a bank Vice President, one a truck driver and the last owns an appliance store. And then there’s me; a thirty six year old boy from , with a Masters in Business, living in and working as a carpenter and a nanny.

I have never had dreams of being a carpenter and a nanny. I have done everything from working as a marketing manager to delivering coffee to business executives to peddling socks and ties. So why this all of a sudden?

Because I don’t know what exactly I want to do, although I have a pretty good idea that I want to write. You see, all my life, stories have been piling up in my head like fifty pounds of crawfish in a thirty pound sack. I decided that although I am getting prettier, I am not getting any younger. And so when my friend Heather made me an offer to be a nanny for her one year old daughter, Lea, and work in her husband, Seb’s furniture design company I said, “Why not? Those executives will just have to get their own coffee. Will I have to change Lea’s diapers?”

It’s a new life for me. I’ve never lived in or with a married couple. I’ve never been a nanny and I’ve rarely used a hammer except to hang up the occasional picture or to crack open walnuts. But here I am now with twenty dollars in my bank account in case of an emergency, and sleeping in a single bed like one of my childhood. I don’t know what’s going to happen. It’s like watching that scene in a horror movie when the pretty homecoming queen hears a noise in the closet. You scream at her not to open the door. But deep down you want her to. If she just ran away, you’d never know what was in there and after paying $10 for a movie, you’d be pretty disappointed. I’m hoping that there’s not a masked man with a butcher knife here in waiting to chop me up. I’m hoping there’s a publishable novel in that closet waiting for me. But if my head gets severed, at least I’ll know. And I have faith that my family and friends and especially my mother have the right kind of band aids and a big bottle of Bactine to help me heal.

So you’ve heard it from my lips. I’m going to take a deep breath and open that closet door because I really want to know what’s inside. Don’t you?

Frere John, go ahead and write your children song... For sure, the door will open by itself!

Do cow islanders say things like that? Like, using "t" or "tee" (spoken only, really) to connote "little" or "young-one"? It was a Cajun thing for sure back in Breaux Bridge when I was growing up---- just curious if the island Cajuns did the same thing. I wonder if the prairie Cajuns do that, too. Hmm. I'll have to research that in my big book of Cajun phrases.

You see, I was T-Frank to some (not many, though) because my dad's name was Frank also. To my family, I was and still am, "Frankie". I'm still Frankie to my nieces and nephews, and brothers and sisters, cousins, aunt/uncles, family friends and childhood friends, too. Funny though, professionally I've never introduced myself as Frankie but I still have childhood friends who call me this. By the way, I have three brothers and three sisters----must be a Cajun catholic thing, for sure